The asylum grounds, and the nearby quarry 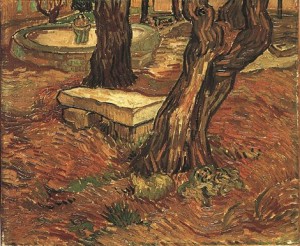 I’d made my first visit to St Remy the week before to discover places where Vincent van Gogh painted while in the asylum there in 1889. But I’d come away quite dissatisfied at not being able to see the specific views and motifs I’d hoped for, as they are still being part of the hospital and not accessible to van Gogh tourists.

Armed with different expectations this time, I wanted to go back and look again. And take in more fully those places that I could see.

Like the stone benches under the pine trees, shown above. And here they are today. Exactly the same. In fact, Vincent may well have parked his arse right here!

The woman selling tickets at the gate was chatty and asked about the vast book of van Gogh drawings I was lugging about. In my schoolgirl French, I explained I’d studied van Gogh for 27 years and had hoped to see more and understand more by looking at his work against the real subjects. She explained that the real subjects, especially architectural ones, around the asylum were out of bounds as they are still used as part of the hospital.

I knew this of course from my visit last week, but her having explained it to me made a difference. She reassured me that most of the scenes that I wanted to see still exist and are well-cared for. I needed to hear that. This, coupled with my later discovery of postcards in the gift shop illustrating some of the out-of-bounds sites at the asylum juxtaposed against Vincent’s paintings made me a much happier Jane.

I had wanted to see this fountain, which crops up time and again in Vincent’s compositions:

… but it was off limits. This photo I found on a postcard would have to do:

I had wanted to see the main entrance to the hospital. Vincent shows us the way out, looking out towards that fountain:

And while I know that precise doorway still exists, I had to make do with this very similar one:

And he shows us the way in:

And this is what it looks like today, as I discovered on another postcard:

These brief glimpses would have to do.

So we headed off past clumps of irises, through the cloister and the gift shop (which somehow I managed to miss on our previous visit) and through to the walled field which Vincent painted repeatedly.

I wanted to paint it too. The field is no longer a meadow or planted with corn as in Vincent’s day, but has been slightly terraced and planted with lines of lavender and irises.

I’d looked at paintings of Vincent’s walled field many a time and read accompanying text which told of how the wall symbolised confinement to him, but as I painted it:

…and sat and considered the space, I also understood it as a symbol of safety and security too. Away from the world which called him mad. Ironic, I thought. Here’s my painting:

Over the tall trees of pine and cypreses to the south, the ragged, rounded limestone peaks of the Alpilles rise, exactly as Vincent showed us…

…weird rocks, sculpted in the way only limestone can be by time and the elements into fantastic shapes:

I was particularly pleased with a hunch I had to follow a track down towards the mountains to a limestone quarry where Vincent ventured to paint the rocks and trees. Now I understand why he chose it. It was close by. Very close by!

While I sat in the walled garden and painted, happy to be here, Moth read his Deep Purple Appreciation Society magazine and we watched the parties of Japanese tourists come and go. I bet they old stone quarry wasn’t on their tourist itinerary.