About the Nebra Sky Disk

The Nebra Sky Disk dates from about 1600 BC and is a bronze disk decorated with with gold. It shows the  sun or full moon, a lunar crescent, and stars. It was probably used by our ancestors as an astronomical instrument and was probably of religious significance.  It’s a rare thing that combines mathematics, history, science, spirituality and art! 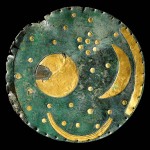 This is the genuine article!

It’s the oldest representation of the heavens discovered so far.

It is 32 cm in diameter and around 3,600 years old. It shows a golden sun ship at the bottom, the crescent moon, the sun or full moon, and 32 stars in gold, including the Pleiades star cluster, as they appear just before an eclipse. The arcs at either side of the disc, (the gold of the one the on the left has been lost), represent the area of the horizon where the sun rises during the year.

Archaeologists assume that it is some kind of observatory tool; a portable guide to the heavens perhaps, and was probably used to help early farmers set the calendar for planting and harvesting crops.

It is one of the most important Bronze Age finds in recent years but it was almost lost into private ownership. It was discovered by treasure hunters and illegally dug up in 1999 near the German town of Nebra. They tried to sell but it was eventually recovered in a sting operation by the police. It has been thoroughly examined by archaeologists, historians, metallurgists and astronomers and is now displayed in the Museum of Halle.

Little is known about the people who made and used it, but from this one object alone we can deduce they were skilled metal workers, astronomers and mathematicians and had an extraordinary sense of beauty which arises from function. For those of us who were taught that people before the Romans were barbarian, uncivilised, uncouth and hardly worthy of study, this object blows that theory out of the water.

My interpretation of it is a collagraph.

What is a collagraph?