Bird art for joy and solace

A random selection of bird art by various artists

Bird-themed art for joy and solace

At the start of lockdown, British naturalist Chris Packham set up a Facebook group “for wildlife watchers and enthusiasts alike to share their pictures and videos of wildlife across the world during the COVID crisis” to find solace and joy in nature. I joined on day 1! I don’t take photos of birds and wildlife (that’s far too difficult, and besides it’s my husband’s job) so I thought I’d share some of my own paintings to the group. They went down very well!

Later in 2020, I began posting images of bird-themed art by other artists, in the hope that members of the Facebook group might be interested in art history, and perhaps be exposed to artists and paintings they hadn’t seen before.

Here’s what I have posted so far, using the hashtag #BirdArt 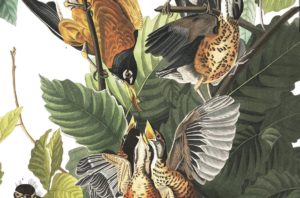 Here’s a detail from plate 131 of the American Robin (Turdus migratorius) from the most expensive book in the world *ever* – John James Audubon’s ‘Birds of America’ (published in sections from 1827-1838). IMO, no one has surpassed Audubon as a bird illustrator, and I can’t imagine how anyone could.

The magic of Audubon is how he combines forensic observation and behavioural characteristics, with expression and grace. It’s miraculous. You can see it in more detail here. 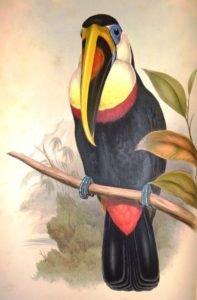 He was an ornithologist and expert taxidermist, becoming the first ever curator and preserver at London Zoo which allowed him to get his hands on all manner of fabulous specimens from around the world, which he drew and painted. It was to Gould that Darwin sent his ‘finches’ from the Galapagos for ID and cataloging. He understood that they were different species, and so unwittingly helped Darwin form his theory of evolution. 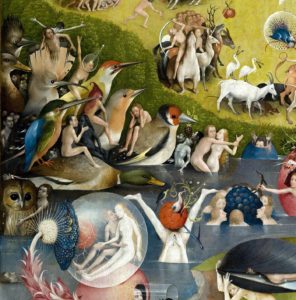 The Garden of Earthly Delights” by Dutchman Hieronymus Bosch

Here’s a tiny detail from one of the most extraordinary paintings ever made! – “The Garden of Earthly Delights” by Dutchman Hieronymus Bosch, made in c1500.

As well scenes of weirdness and the punishments of hell, Bosch has included this line-up of birds in the central panel: ducks, hoopoe, green woody, robin, goldfinch, kingfisher, tawny owl, spoonbills. In other parts of the painting there are storks, swallows, chickens, egrets, owls, parrots… What it all means has been the subject of discussion for 500 years. Don’t ask me – I’ve been trying to make sense of it for 40 years! You must make up your own mind. 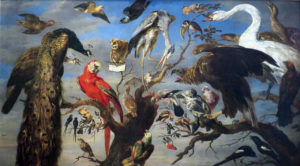 Here’s one of many ‘Bird Concert’ paintings made by Flemish painter Frans Snyders (1579-1657). He was a contemporary of Rubens and van Dyck, but rather than follow them into portraits and histories, Snyders specialised in developing the ‘animalier’ genre of painting – living creatures, not still lives of dead ones. What’s remarkable about this (and others in his Bird Concert series) is that he was able to closely observe some really exotic species – aracari, macaw, parrot – as well as those he would have seen locally. I love the owl holding the sheet music, conducting the avian choir. Imagine the cacophony!

As with a lot of painting from this period, there’s often religious meaning baked into it. In this case, so the story goes, a flock of birds was attracted to an image of the Virgin Mary in some trees near Brussels in the 13th century. The local friars built a chapel there and later suspended caged birds at the site. It may have been this that inspired Snyders into his Bird Concert paintings. Or maybe it was just an excuse to paint birds!

He painted a lot of these, as did other Dutch and Flemish artists who picked up on this theme too, so they must have been popular with buyers. 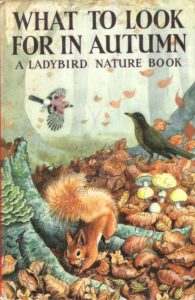 What to look for in Autumn by CF Tunnicliffe

Charles Frederick Tunnicliffe OBE, RA, (1901- 1979) was a British painter of wildlife, birds and nature, and is best known for his illustrations which were widely reproduced on Brooke Bond tea cards (remember collecting those, People of a Certain Age?) and, of course, those magnificent, inspirational Ladybird books.

Here’s his illustration for the cover of “What to look for in Autumn”, published 1960.

I adored Ladybird books and learned so much from them. Did you have this one, Boys and Girls!? Tunnicliffe’s genius was that he built complex compositions and made everything look completely familiar. He painted precisely giving all the creatures an accessible context and (to my eye) expressed real magic. He’s had a massive influence on my own art. 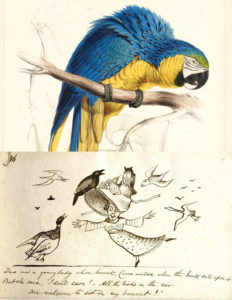 Blue and yellow macaw, and a limerick by Edward Lear

You’ve heard of Edward Lear, 19th century British author of the “Owl and the Pussycat” and other nonsense verses? You may not know that he was also a remarkable painter of birds. He began illustrating parrots with breathtaking skill aged only 18. (IMO, as a painter of birds he comes second only to Audubon.) Here are two examples of his fascinating feathery output – a detail from a lithograph of a blue and yellow macaw from 1832, and a little pen and ink sketch he made to accompany one his daft limericks:

“There was a young lady whose bonnet
Came untied when the birds sat upon it
She said: ‘I don’t care!
All the birds in the air
Are welcome to sit on my bonnet!”

…but I think the last line could be better, don’t you? How about: “Are welcome to sit on it” 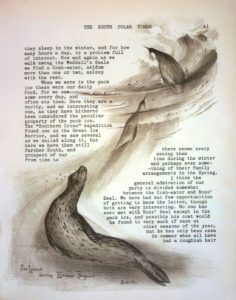 Page from the South Polar Times by Edward Wilson

Edward Wilson (1872 – 1912) was a polar explorer, doctor, naturalist, and exceptionally talented artist, who died in the tent with Captain Robert Falcon Scott on the doomed Terra Nova expedition to collect scientific data and be the first to reach the South Pole. In 1911 he lead a 134-mile trudge through the polar winter – which came to be known as “the worst journey in the world” – to reach an emperor penguin colony. Wilson was convinced that penguins were a ‘missing link’ between reptiles and birds and that studying their eggs would provide the answer.On his Antarctic adventures, Wilson painted delicate watercolours of the icescapes, and drew the creatures they encountered. Here’s a sheet from “The South Polar Times” with Wilson’s illustration of a leopard seal hunting penguins.I am a little bit obsessed with the history of polar exploration. 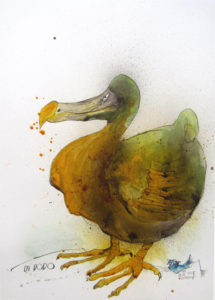 Ralph Steadman (b. 1936) is a much-loved British illustrator.

His wit and sense of satire bring a sharpness to his political caricatures and cartoons. He’s done books, album covers, posters, advertising – you name it! In 2014 he was involved in the ‘Ghosts of Gone Birds’ project where his free, fresh and urgent style produced some poignant portraits of extinct birds – including this lovely dodo.

As David Quammen notes in his book “The Song of the Dodo” (if you haven’t read it, I urge you to!) we will never know what sound the dodo made – what was its mating song? what was its call? – as they were all killed and eaten before anyone thought to write it down. 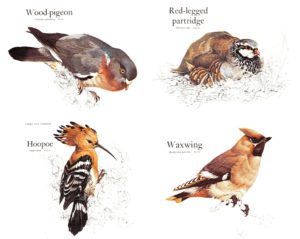 Page from the Book of British Birds by Raymond Ching

For many of us of a ‘certain age’, Raymond Ching’s (b. 1939) breathless illustrations for the Reader’s Digest Book of British Birds (first published in 1969) were the first time we had clapped eyes on the astonishing variety of species in our little country.New Zealander Ching impressed the publishers with his unique style; fluid, painterly, expressive, and (above all for a field guide) almost photographically accurate.

When the publishers asked Ching how long it would take to paint the 230 paintings, believing it would take a few years, he declared: “I can do them all myself and in under a year!” It almost broke him. But his efforts were outstanding. It is now the world’s most successful bird book.

The book was a constant companion in the car on holidays and day trips out when my brother and I were children. I would gaze adoringly at the hoopoe, wondering not only how it was possible that such a glorious thing should exist, but that they should be a British bird. And how could I attract one into our Warwickshire garden?! Of course, I never did. I saw my first hoopoe in France in 1978.Every page of this book is etched into my heart. Perhaps yours too?Do you still have your copy? I do. Thank you, Ray Ching! 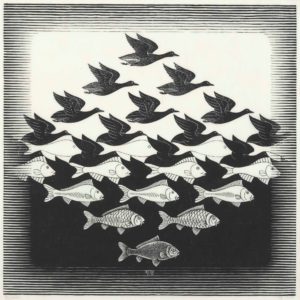 Sky and Water 1 by MC Escher

Inspired by mathematics and Islamic art, Dutch graphic artist Maurits Cornelis Escher (1898-1972) created some of the boldest and most recognisable art of the 20th century. In his woodcuts and lithographs, which were frequently inspired by the natural world, he explored tesselation, skewed perspective and the illusory quest of all artists – how to commit a 3D object onto a 2D surface.

This woodcut ‘Sky and Water 1’, printed in 1938, he shows us – in black and white – the interconnectedness of the natural world.As Picasso once said: “Art is a lie which helps us realise the truth”. In today’s world of fake news, propaganda, photoshoppery and Insta perfection, we’d do well to remember the message of Escher – all is not what it seems. 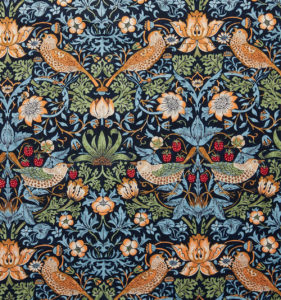 The Strawberry Thief by William Morris

Writer, socialist and activist, designer, illustrator and artist, he contributed oh-so much to what we think of as a British (in truth, probably ‘English’) artistic style. Early on, Morris saw the impact of industrialisation and pollution on society and the natural world, making him a proto-environmentalist – a green campaigner. His green philosophies and assertion that art should be ‘affordable and hand-made’ for everyone, are values I subscribe to in my own art practice.

Here is his most popular repeating textile/wallpaper design, “The Strawberry Thief”, from 1881, inspired by thrushes scrumping fruit in his garden just down the road from me in Oxfordshire.

Thank you for looking!

If you’d like to have a look at some of my paintings of birds and animals, start here.

Secular Christmas cards - festive and direct from the artist

"As the Crow Flies" - a signpost installation lockdown project

Hand-painted signs for your house and garden