Although our recent holiday in Cuba wasn’t the typical exploratory journey through the planet’s natural wonders that Moth and me normally take, we couldn’t but help notice the beautiful species of  common birds flying about all around us. 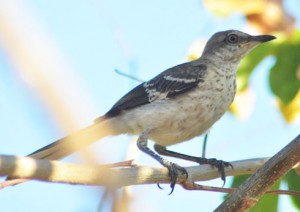 We arrived in Cuba at night and I woke before dawn but couldn’t stay in bed for fear of missing something. I sat out on the terrace outside our room to watch the sun rise and see what was out there. Bats fluttered around me, and as the light became stronger I started to hear unfamiliar birdsong. I couldn’t wait to find out who was singing!

Pictured left is the very handsome and quite large Bahama mockingbird Mimus gundlachii which with it’s big eyes, long legs and long tail was perfectly equipped for jumping about in trees looking for fruit and insects. It’s a sin to kill a mockingbird, according to Harper Lee. How right she is.

The Cape May warbler Dendroica tigrina was a very pretty little thing and let you get quite close up. I love his flecked, stripey pale yellow chest. He skulked around in the pandanus trees hunting for insects and grubs, and vigorous defended his territory from other birds of any species.

The tiny yellow-faced grassquit Tiaris olivaceus was similarly not worried about humans getting too close. This one bimbled around on lawns and jumped up to collect grass seed.

I wouldn’t normally show you a captive bird but I’ll make an exception for the Cuban parrot Amazona leucocephala, Cuba’s only parrot species.  This is surely the species that sat on the shoulder of Long John Silver in Robert Louis Stevenson’s Treasure Island.

Another handsome common bird is the grey kingbird, Tyrannus dominicensis. I especially admired the feathery whiskers around the base of his beak. He had a nice crest when he got excited, too.

The red-legged thrush Turdus plumbeus was everywhere; in gardens, smallholdings and scrubby roadsides. Noisy and unmistakeable, this one is very like the American robin, which is of course also a thrush.

And so we went to breakfast to be greeted by a noisy mob of Carib grackles Quiscalus lugubris which liked to take scraps and crumbs from your plate when you weren’t looking. They were bold,fearless and intelligent and had fabulous glossy black plumage. The males had a spectacular wedge shaped fan-tail which they would cock and fan out to impress females… including me.

But it was, naturally, the hummingbirds that stole my heart. It took me an hour or so to find one, but I knew they had to be there because of all the red, nectar filled flowering trees and shrubs. Finally we found him, the Cuban emerald Chlorostilbon ricordii perched on his favourite tree just metres from our room.

My American readers will wonder why I’m am so obsessed with hummers, but we don’t get them here in Europe. They live only in the Americas and we have nothing like them in Europe. In Africa their ecological niche is filled by sunbirds. I just think they are an insanely pretty shape, and combined with their delicate size, superlative flying skills and iridescent plumage what is not to get seriously enthusiastic about?

My husband Moth spent hours lurking in the hotel gardens with the camera to get these photos. This bird is only 10cms long from beak tip to tail tip and moves with dazzling speed, like a dragonfly. You have to use a big lens to get any detail and a fast shutter speed to freeze wing movement and this species don’t spend more than a moment at each bloom, often being frightened off by the warblers.

Photos above by Moth Clark

Although we didn’t see any, I must also tell you about the bee hummingbird Mellisuga helenae (pictured below), the smallest bird in the world, which is endemic to Cuba. This tiny jewel of avian perfection measures only 5cms from beak tip to tail tip and its wings are too fast for the human eye to see. It won’t surprise you to learn that due to the usual curse of habitat loss it is now an endangered species.

Swimming with dolphins in Cuba