The birds of Peru

Avian fauna of the coasts and mountains

Peru is home to nearly 2,000 species of birds; a fifth of all the world’s bird species.

To someone like me who is fascinated by birds, but by no means an expert, that’s a hell of a lot of birds to swot up on. And OK, I can tell a tern from a cormorant from kingfisher, but what about the coquettes, woodnymphs, wrenchats sunbeams, bananaquit, trogons and antpittas? I wouldn’t know them if they came and pecked me on the nose.

Armed with my ignorance, eager curiosity and a big fat bird book the size and weight of a housebrick, we set out into Peruvian air space. 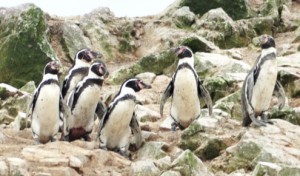 The first stop was Paracas national reserve, a seabird colony on some small islands just off the coast. Every few years the islands are harvested for guano (that’s bird poo), and for that to be economically viable, I knew they’d be a good few birds there. It was good to start with birds that I had a fighting chance of recognising, these Humboldt penguins  pictured above. (Spheniscus humboldti) for example.

Once common, these creatures are now endangered as are most penguin species because of human over-fishing. I had only ever seen Humboldt’s in a zoo before. It was great to see this little group pootling around the rocks. I only wish there had been more.

The Peruvian pelican (Pelecanus thagus) is much larger than other species of pelicans I’ve seen before.

Most seabirds lack colour – it’s a black and white world out there on the ocean – so to see such a delightfully colourful beak was an unexpected treat.

Peruvian boobies (Sula variegata) along with the pelican together produce the rich guano that once made this part of the coast of South America such an attractive prospect to European traders.

The handsome Inca tern (Larosterna inca) is common on this part of the coast. We saw quite a lot of juveniles and it looked to be doing quite well. Isn’t that white facial plume lovely?

Lovely is not a word you could use to describe the turkey vulture (Cathartes aura). But they are always dramatic and elegant aviators. They can be found throughout the Americas and I think in the US they call them turkey buzzards. We saw them frequently just about everywhere on our journey throughout Peru. Close up they don’t have pretty faces, but they have gorgeous wings.

And character too. They need thermals to get them up and ride as they soar over the desert. But at night they’re grounded. First thing one morning, while it was still cool, we found this unruly lot roosting on the hammocks of our lodge at Puerto Inca.

The Andean condor (Vultur gryphus) is a bird of bigness; biggest wingspan of any flying bird at 3.2metres, nesting in big mountains over 16,000feet, and big life of about 50 years. This thing is a flying barn door. We went to Colca canyon to see a resident population of them.

We had to wait a while in the bright morning sunshine for the thermals to get going before the condors could comfortably ride them and gain height.

As they swooped no more than perhaps 20 feet over our heads I thought that this must be what a mouse feels like when confronted by a hunting owl: very small, very humble.

And talking of small, here they are. The Hummingbirds. Oh yes. Little precious avian jewels which, although of this world, seem to live in a different space/time continuum to other creatures. They are utterly enchanting in every way except one: I am almost entirely unable to identify them. They are so quick and their iridescent plumage makes it hard to actually see the colours. Here’s the only hummer I can identify; a giant hummingbird (Patagona gigas).

We spend ages watching these next two hummers zipping like insects around the flowers at Santa Catalina Convent in Arequipa as they sipped nectar. This one is, we think, a female oasis hummingbird (Rhodopis vesper).

We tried and failed to make sense of their calls: chirping, clicking and whirring like no bird I’d heard before.

Check out the tail on this one!

We think this it’s a male Peruvian sheartail (Thaumastura cora). Let me know if you know better!