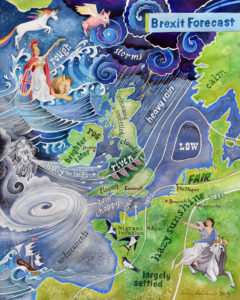 …and now, it’s time for the Brexit Forecast…

“What is the point of being an artist if I can’t express how I feel? The only thing I can do with these feelings of sadness, frustration, anger, embarrassment, and the sheer terror I have about Brexit is to paint them.”

Overtly political paintings are not what I do. But the most gigantic political issue that Britain has faced, possibly since the Henry VIII broke with Rome, and certainly since the ‘Glorious Revolution’, has forced me into it. Brexit.

I love being European, and enjoy the diversity and similarities of all of my EU brothers and sisters. I value our close historical, cultural and commercial relationships. But above all I especially cherish the last 60 years of peace. The EU is not perfect, but as Churchill said: “Meeting jaw to jaw is better than war.” Here, here!

The result of the 2016 Leave/Remain EU referendum distresses me. The electorate were lied to by a campaign that actually broke the electoral laws (they cheated!), driven by a bunch of self-serving, (predominently) ‘establishment’ white male figures with deep and murky vested financial interests. To me, it stinks of a right-wing coup! Some basic statistics and facts about Brexit.

My country – a union of four small nations – has been riven by these figures, and their misguided notions of Britain’s ‘Greatness’ based on a bullying Empire that plundered and enslaved entire populations.

As I write in March 2019, just days away from the ‘official’ leave date (though it looks like it may be extended), the chaotic UK government is in meltdown; paralysed by long-obscured festering divisions within the country which have been exposed for all to see.

What is the point of being an artist if I can’t express how I feel? The only thing I can do with these feelings of sadness, frustration, anger, embarrassment, and the sheer terror I have about Brexit is to paint them.

Britain is just a tiny archipelago on the fringe of Europe, no more or less important than any other country. We love drinking tea, moaning, eating chips, and talking about the weather – which is also a subject I frequently paint. So just 2 weeks ago, I thought that the best way to express my feelings about Brexit is to paint them as a weather map, entitled “Brexit Forecast”.

The figure in the top left is Britannia, the Roman goddess of these isles. Her lion covers his eyes depairingly, and her unicorn leaps away to join a flying pig. The whole of Brexit is a fantasy.

The figure in the bottom right is Europa, the goddess after whom the continent is named. She rides her consort – Zeus the bull – and entreats Britain not to leave.

I hardly need to explain the rest!

This is my opinion freely expressed – as is my democratic right – on my website. I understand it may not be yours. But I make no apology to you, as you wouldn’t to me. If you don’t agree, then why not paint your own Brexit Forecast map? But whether you voted Leave or Remain, I wish you Peace.

The original painting is for sale here but the truth is, I didn’t paint this to ”profit” from it – I painted it because I HAD to. Feel free to share the digital file, but don’t forget to credit me – the copyright is mine.

Prints, greetings cards and tea towels of this painting are available.