The death of Captain James Cook

“Do just once what others say you can’t do, and you will never pay attention to their limitations again.” 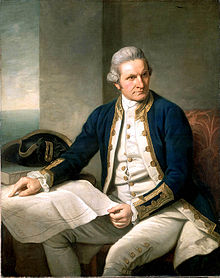 Whatever you may think about British colonial expansion, its impact and subsequent noxious effects, you have to admire the bravery, spirit and ambition of farm labourer’s son Captain James Cook. When he sailed away from Blighty in the 18th century it was as risky and as pioneering a thing to do as Gagarin’s first space flight in the 20th.

Born on 7 November 1728 in Yorkshire, aged 17 James became an apprentice on the small ships that sailed up and down the north east coast of England trading coal. He applied himself diligently to both the back-breaking, git-hard physical duties as well as the complex mathematical, cartographic and astronomical skills he would need to one day take charge of a ship.

In 1755 he enlisted in the Royal Navy, which was gearing up for the Seven Years War. He realised it would be the fastest way to progress in his career, and he rose quickly through the ranks. He displayed a dazzling talent for surveying, and charted the coast of Canada in maps which were still being used in the 20th century. At a time when accurate, reliable charts were few, this skill was as valuable as gold. It didn’t go unnoticed.

Voyage to Tahiti and beyond

In 1768 he was asked by the Royal Society to sail the HMS Endeavour to Tahiti and observe the transit of Venus across the sun. The data Cook recorded would assist with calculating longitude as well as expanding scientific knowledge. Cook also had a secret mission, contained in sealed orders to be opened only after the Tahiti mission was accomplished. He was to search for the mysterious Great Southern Land, Terra Australis. Sailors knew there was something down under but what was it? Where was it? Who lived there?

When Cook sailed away from England on what would be his first round-the-world trip, the Pacific Ocean was largely uncharted and he’d have to make it up as he went along, as well as try to keep alive all 90 of the ship’s company,  which included botanist Joseph Banks. After eight months they reached Tahiti and established friendly relations with the local people. Then he sailed south west with a Tahitian guide, Tupaia, and in October 1769 reached New Zealand, only the second group of Europeans to do so. But friendly relations with the warlike Maori proved difficult, despite Tupaia’s ability to communicate with them.

Cook set about mapping the islands’ coastline, correctly observing the passage between the islands, now known as the Cook Strait. In less than six months he mapped 2,400 miles of New Zealand’s coast. The discovery was a great achievement, but it wasn’t the fabled Great Southern Continent he’d hoped for. He would have to sail on.

In April 1770, Cook’s party landed on the east coast of Australia, the first Europeans to do so. The currents and winds forced him to sail north and in doing so he was able to map most of the east coast of the continent naming places as he went: Botany Bay, Sydney Cove, Cape Tribulation and giving the whole lot the name New South Wales and claiming it for England. He returned to England in July 1771. The first voyage of discovery had taken three years.

There would be two more voyages of discovery.

The second, in HMS Resolution, would take him south into the Antarctic circle for the first time and to claim South Georgia, and then into the Pacific once more to chart the Friendlies, Easter and Norfolk Islands. The third, in HMS Discovery, would take him on a quest to reveal the Northwest Passage and lead him up the west coast of America to the Bering Straits and finally, finally Hawaii.

For the most part Cook was firm but fair. He treated his crew justly and they always shared rations, his officers enjoyed no special privileges. He knew about ship-borne diseases and did what he could to feed his crew on fresh provisions caught or bartered for locally. He traded nails, cloth and other useful trinkets with local people for chickens, fruit and coconuts. Eating fresh local food, he observed, kept the scourge of scurvy at bay. Of course he didn’t know why; vitamin C was not isolated and explained until 1931. He was a stickler for hygiene and insisted that his men wash both themselves and the ship frequently. His actions would keep most of his crew in good health.

James Cook is a difficult man to get to know.

His extensive journals reveal a man walking on a knife edge, trying to navigate a delicate balance between doing his job efficiently, self-preservation, the discipline and wellbeing of his crew, extreme patience, painstaking exactitude but also shortness of temper.

Among his tasks on his voyages was to “to observe the Genius, Temper, Disposition and Number of the Natives” and to “endeavour, by all proper means to cultivate a friendship with the Natives.” In a world where white European attitudes of cultural and racial superiority ruled the waves, Cook stands out as enlightened. I think he remembered he was son of a farm labourer and saw that the natives he met were no different to the natives back home working the land. For example, in 1697 William Dampier noted of the aboriginal people he met: “The Inhabitants of this Country are the miserablest People in the world… setting aside their Human Shape, they differ but little from Brutes.” But Cook describes the cultural practices of the people he encountered with respect and thoughtfulness:  “they may appear to some to be the most wretched people upon Earth, but in reality they are far more happier than we Europeans…. In short they seem’d to set no Value upon any thing we gave them…this in my opinion argues that they think themselves provided with all the necessarys of Life and that they have no superfluities.” To Cook, these are not ignorant savages, they are immensely practical and sensible. Today’s ugly consumer society still has this priceless lesson to learn.

Cook knew the impact the arrival of his ship would have on the small communities he encountered. He was acutely aware of the impact of European diseases – especially sexually transmitted infections – and would flog any of his crew who shagged local women. Many communities had already had other explorers visit and been raided and violated by them. No wonder they were wary. Although Cook took pains to forge polite, friendly relationships where others had not, he was nevertheless an intruder and meetings on those sun-kissed, palm-fringed beaches were often tense or ended in violence or death.

And so it was when he dropped anchor in Kealakekua Bay, Hawaii for a second time on 14 February 1779. Cook’s previous visit had gone well and he forged friendly relations with the Polynesians. But there was a skirmish on the beach. Cook’s head was smashed and he was stabbed to death as he lay in the surf.

Undoubtedly Captain James Cook quite literally redrew the map of our fabulous world.

But his achievements go further than mere cartography. Observations made on his voyages would lay the foundations of quite new ways of understanding the world and everything in it: oceanography, astronomy, anthropology, ethnography, botany, zoology. He may have been the first European to set foot in many new lands, but he was long dead by the time British policy was to exploit, dispossess and disrespect the extraordinary people and places he discovered.