The constellations of the Northern sky

Heavens Above! What's it all about?

Constellations of the Northern sky

A map of the constellations of the Northern hemisphere

Jane’s original idea for Heavens Above!, a constellations chart, came from her recent Shakespeare paintings. She wanted to paint a Midsummer Night’s Sky, a map of the heavens as seen on 21 June from Stratford-upon-Avon. But the idea quickly developed and morphed. 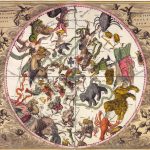 A little research revealed a number of beautiful antique sky charts, like this one by Andreas Cellarius, a 17th century Dutch cartographer.

She decided that she would paint it like the early cartographers, sticking to a view as from the North Pole rather than Stratford-upon-Avon. So Polaris, the Pole Star in the tail of Ursa Minor (the Little Bear) is the central rotation point, exactly like on antique charts.

For millennia, people have been staring up at the stars trying to make sense of what’s going on up there. Back in the second century AD, Ptolemy published his scientific treatise Almagest, listing 48 constellations. Charting the heavens was a vital science because the stars, along with the position of the sun, were essential for navigation. 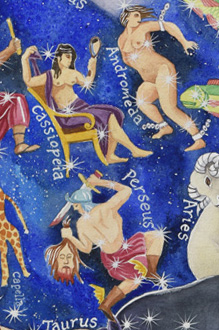 Early research for the painting became a journey into Greek mythology – for many of the constellations are named after classical gods and heroes. For example, Jane became very interested in Cassiopeia, a vain and beautiful queen who boasted that her daughter Andromeda was lovelier even than the Nereids, the female sea spirits. To punish Cassiopeia for this heresy, Poseidon, the god of the sea, sends a sea monster to wreak his revenge – perhaps a little harsh! Andromeda is chained to a rock as a sacrifice to the monster, but Perseus, a major hero and slayer of monsters comes to the rescue.

Every society has stories to help explain nature and history. Inevitably, the people who first described the constellations named them after characters from their myths. Perhaps if we were describing them today, we’d call them after our cultural heroes: David Attenborough, Nelson Mandela, Princess Diana, David Beckham…

But this is not just a painting about Greek mythology. As Jane continued to think about it, she realised it was actually about exploration and discovery, understanding the universe and our place within it; in other words, science. Jane loves science!

Stars and science, pioneers and heroes

But there’s much more. As this is a painting about heroes, exploration, discovery and science, Jane has included some unexpected things not found on those early star charts because they hadn’t happened yet. 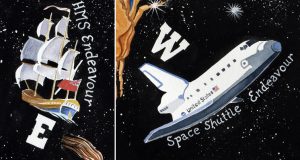 Jane grew up in the 1960s, the Space Age, a time of great scientific discovery – and it was all on the telly. That’s why she has included in her painting the brave pioneers of the space programme; Apollo 11 took the first humans to land on the moon in July 1969, and later there was the super-thrilling Space Shuttle.

Space Shuttle Endeavour was named after Captain Cook’s ship the HMS Endeavour which is also shown in the painting. HMS Endeavour sailed to Tahiti in 1769 to observe the transit of Venus, and later reached the east coast of Australia for the first time. Jane says: “Captain Cook was certainly as brave and pioneering back then as any 20th century space traveller.” Jane’s a big fan of Captain Cook and wrote a blog about him here. 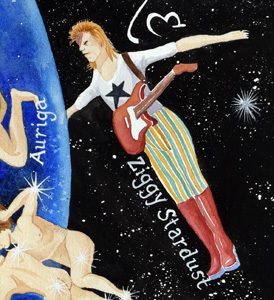 The excitement of the Space Age spilled over into popular culture and David Bowie was a cultural pioneer of the time. Of course, he died earlier this year (2016) and Jane wanted to commemorate this. “Bowie’s early works all seemed to rotate around space; Life on Mars, Space Oddity, Starman, Ziggy Stardust…” says Jane, and “Captain Cook (again) wrote Do just once what others say you can’t do, and you will never pay attention to their limitations again. It’s as if Bowie made a career of this sage advice. And now Bowie is dead, he has returned to stardust.”

Incidentally, speaking of cultural pioneers and the skies, Jane and I made our marriage vows as Nick Drake’s beautiful song Northern Sky played…


See ‘Heavens Above!’ in detail

The Isles of Scilly