Today I had the enormous pleasure of visiting the Darwin – Big idea big exhibition at the Natural History Museum (NHM) in London.

I took my 81-year-old dad with me. Although he’s very frail and wheelchair-bound, he was just about the best company I could have wished for; he is a botanist but studied zoology at university in the 1940s. It was his insatiable curiosity for science and the natural world which fueled my own. 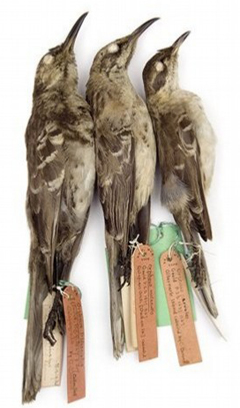 There were so many treasures to be seen! Before we even reached the Darwin exhibition we marvelled at the building itself – an architectural masterpiece of by Waterhouse and surely the finest building in the UK, then the gigantic ichthyosaur fossils, and finally a glorious gallery of bird specimens.

And then we entered the Darwin exhibition. The first thing we saw were two insignificant-looking little brown birds lying dead on a purple velvet cushion in a perspex case. The significance of these drab little creatures is impossible to overstate. Darwin collected these very mockingbirds from two different islands in the Galapagos, and they gave him the ‘big idea’ which he spend the next 20 years proving, that species can mutate to form new species by the mechanism he called natural selection. Genius. But for Darwin, telling the world about his idea was “like confessing to a murder”. You might say it was these mockingbirds and Darwin’s thinking that knocked the notion of the Almighty Creator in the Sky off his perch!

The exhibition continues with a display about the creature of the Galapagos and the voyage of HMS Beagle, a replica fossil glyptodont Darwin unearthed in Uruguay, stuffed rheas, giant tortoises, a live green iguana called Charlie, a tray from Darwin’s beetle collection, a mock up of his study at Down House, a case of fancy pigeons showing how artificial selection works, hominid skulls, letters he wrote to fellow scientist, a first edition of the Origin of Species, and even a precious original page from the first handwritten draft of the Origin of Species.

Darwin kept notebooks. Lots of them. Many of them small enough to fit into a jacket pocket, containing ideas and observations supporting his explosive idea. One page in particular made me gasp. Beneath the scrawly words ‘I think’ he explains the inter-relatedness of species visually with rough inky lines branching off from each other. It’s the sketch of the tree of life; perhaps the most important doodle ever jotted. I think so too, Charlie.

The show has enough interest for those of us who already know a bit about Darwin and his work, and plenty to amaze those that don’t. For lovers of science, for wonderers about the natural world, for thinkers about stuff that matters, indeed for anyone of any age with any interest whatsoever in what it means to be alive, this exhibition will thrill. I suppose the best recommendation I can give is that I’d go to again like a shot. Check out this online slideshow of some of the exhibits.

I should mention that the all staff at the NHM we encountered couldn’t have been more helpful to me and Dad; holding doors open, helping in the cafe, in the car park and so on. Nothing was too much trouble and this went a long way in making this most memorable visit even better.

Tikis at the edge of the world

The Temptations send me to Cloud Nine