The landscapes of Woldgate near Bridlington

A visit to Hockney’s East Yorkshire

Did you see the exhibition of David Hockney’s paintings at the Royal Academy earlier this year?

Many of the pictures were of the landscape of East Yorkshire wolds near Bridlington where he lives.

If you have never been to East Yorkshire you won’t know that it is probably the best kept secret in England. The coastal cliffs are alive with seabirds and the long sandy beaches empty. But most of all, the landscape is tear-jerkingly lovely. Earlier this week I had the chance to see those landscapes for myself. With the help of Simon Gregson’s website I was able to find just a few of the precise locations which inspired Hockney.

I always find it fascinating to go to the precise locations of a painting. You can see how the artist has translated what is actually there into a painting. It helps me in my own painting to work out how the great masters did it: how to see, how to look, how to flatten the space, what to leave in, what to leave out, and more important than anything: how to create that Spirit of Place.

Woldgate is name of quiet single track lane, a Roman road, running west out of Bridlington.

It snakes across the undulating landscape of wide cornfields and is lined with ash trees and hawthorns, and fringed with tall stands of wildflowers. Occasionally the lane runs through deep copses and it is one of these that he calls Woldgate woods.

Woldgate is a subject he returned to endlessly, making repeated paintings of the same motifs to observe the dramatic seasonal changes and record them in oils on canvas and on his iPad.

This bridge pier often features often in his iPad paintings.

We found the location of Woldgate woods.

Hockney’s repeated observations of an ordinary woodland scene on an epic scale make it extraordinary. It’s as if he’s saying open your eyes, people, take a bigger look at the simple things.

This old tree stump is what Hockney calls ‘Totem’ and it appears in many of his canvases and iPad drawings.

And all around the lanes the fields roll like grassy sea, the contours described by hedgerows and tramlines, lanes and field margins.

Just to the west of the enchanting village of Kilham is the location of a series of works Hockney calls ‘Tunnels’.

It’s a tree-lined farmtrack, rising up slightly towards rolling fields.

I could see immediately why Hockney chose it.

Actually being in the location it was interesting to see how he’d flattened the space and described it really accurately – more accurately than a camera ever could limited by lenses and focal length.

I think Hockney’s Tunnels and Woldgate woods paintings are some of the most deliciously joyful, immediate and expressive English landscapes ever painted and should be considered as great as anything done by Turner and Constable.

This painting is vast; 40 feet long and 15 feet tall, made up of 50 canvases fixed together. It is the largest painting Hockney has ever made and he’s made some whoppers! I really wanted to find the location.

Making the painting was technically only possible because he was able to photograph canvases as he made them and put them together on a computer so he could still see ‘the bigger picture’ as he worked on each individual canvas section.

The copse is, like Woldgate woods, entirely ordinary; just a small stand of 20 or so trees on a corner by a house and outbuildings near the village of Warter. You can’t get back far enough to see all the trees so Hockney’s painting becomes a masterclass in how you translate the view you get while you’re actually there at the roadside into this giant painting.

He does a similar thing in Twenty-five trees on the Bessingsby Road outside Morrison’s supermarket in the semi-Egyptian style. This image is displayed in Salt’s Mill in Bradford which I visited in January.

It’s a really simple series of photographs of a line of mature trees along a major road on the outskirts of Bridlington. He’s stitched the photos together to create a view of the trees which you can never actually get when you’re there hence the ‘semi-Egyptian style’ of the title – a series of things seen individually put together to create a whole sequence.

I just love the way Hockney asks us time and again to look again, look harder, look more often and look at the small things. Only that way can we see the bigger things.

It was an inspirational visit to East Yorkshire. I return to Oxfordshire with a million ideas and only one lifetime to carry them out! Better get my brushes wet…

This is my attempt:  ‘Near Weaverthorpe’ 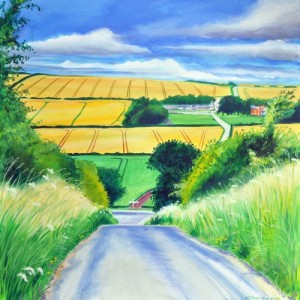