The rise and fall of Easter Island is a parable for our times; a warning from history of what happens when humans doesn’t pay close attention to every detail of Planet Three’s precious natural resources.

On Easter Sunday 1722 Dutch sailor Jacob Roggeveen landed on a speck of volcanic land 12 miles long and 6 miles wide in the vast expanse of the Pacific Ocean, the remotest inhabited piece of land on the planet. Its nearest neighbour, Pitcairn Island, is 1,289 miles away and continental Chile is 2,100 miles away. It’s that remote.

Roggeveen was the first European to clap eyes on its then treeless shores dotted with mighty stone platforms (ahu) supporting gigantic stone statues (moai). Until that day the islanders thought their island was the whole world and they were the only people.

Archaeological, linguistic and cultural evidence suggests that the first settlers probably came from the Marquesas Islands 1,600 miles away, but nobody knows when. A vague folk-memory passed down in creation myths existed, but the true story of how they reached what they called Rapa Nui is lost in time.

What is certain is that the Polynesian settlers arrived with their stone tools, chickens, taro, sugar cane, bananas and stowaway rats to find an island paradise. When they arrived the island was thickly forested with five endemic species of land birds as well as migratory seabird colonies, the sea was heaving with fish and marine mammals and the soil was rich for verdant cultivation. Despite the lack of springs or rivers, the volcanic craters acted as reservoirs and it rained frequently enough for them never to have to worry. They’d do well here!

And so they did, for perhaps a thousand years. The islanders’ unique clan-based culture thrived and to honour their ancestors they built ahus and erected moai. These were manu – sacred – invested with deep spiritual power and ritual significance. With natural resources so freely available, they could relax and indulge their passion for carving in wood and stone. Indeed, they invested their energies in creating stone statues on an industrial scale.

The population grew to perhaps as many as 15,000 in the century before the Dutchman’s arrival. That’s a lot of mouths to feed. Fish stocks dwindled. Seabird colonies were plundered until few came to nest any more. Marine mammals were hunted until none remained. Forests were cleared for cultivation, the trees used for building boats, houses and paraphernalia required to carve, move and erect statues.

When Roggeveen arrived he estimated the population of the almost treeless island at about 2,500. Something had happened in the previous hundred years. Most likely overpopulation and environmental degradation had reached a tipping point, leading to starvation and clan warfare over limited resources. Scholars are still trying to discover the precise details. What is certain is that Roggeveen’s arrival would lead to still greater catastrophe for the islanders.

Roggeveen noted the “remarkable stone figures, a good 30 feet in height”. He stayed a week; time enough to transmit one or two European diseases and kill a dozen locals. The next Europeans came in 1770, when a Spanish ship moored up. It reported seeing the statues still standing. Yet by the time Captain Cook dropped anchor just four years later, he noted that many of the moai had been toppled and the islanders were hungry and ‘wretched’. He noted the “…ratts which I believe they eat as I saw a man with some in his hand which he seem’d unwilling to part with…. Sea Birds but a few…. The Sea seems as barren of fish.” 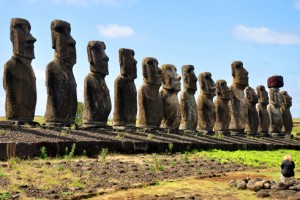 Here, I sit in the relentless heat to sketch the Moai at Tongariki, November 2011, Photo: Moth Clark

What was happening? Perhaps the environmental degradation, combined with the arrival of Europeans had somehow signalled that the ancestors were no longer powerful enough to provide for and protect the islanders. Statue building was abruptly abandoned and all the erect moai were knocked down. By 1825 every single moai was down – all 288 of them that had been erected on ahus. Hundreds more were abandoned in the quarries. With few natural resources and their faith shattered, the people struggled for survival between themselves. Could it get any worse? Oh yes.

In the 1860s Peruvian slave-traders abducted more than half the population. Those that were left squabbled over the vacated, treeless, almost barren land. There were devastating outbreaks of smallpox, tuberculosis and Catholicism. By 1877, only 111 islanders were left. Much of the cultural heritage and folklore was lost. In 1888 Chile annexed the island, confined the few islanders to one small village and turned the bleak land into a sheep farm.

There can be no doubt that what the islanders themselves started through overpopulation and depletion of natural resources, was finished by the arrival of Europeans polluting their sacred spaces, transmitting diseases, enslaving and imprisoning the few that remained.

We homo sapiens like to think we’re smart. But as we gang rape Mother Earth for oil and minerals, poison the once-bountiful seas with effluent, pollute the air with noxious gases, cut down forests, greedily guzzle finite fresh water supplies, mercilessly extinguish other species and breed like locusts, we appear not to be smart enough to learn Easter Island’s lessons and prevent our own downfall.