We found a motel at Morro Bay and as we checked in, the bloke running the place noticed me pick up a postcard of a sea otter (Enhydra lutris). “Would you like to see some?” he asked. We replied enthusiastically! He said if we hurried, that before sunset we might see some in the bay. “Just park by the big rock and wait”he said. We went immediately. 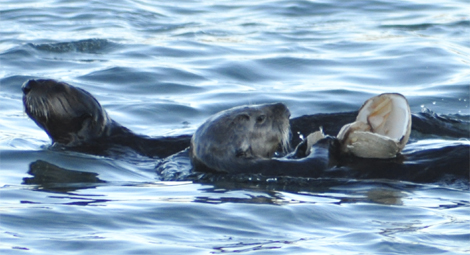 To our delight, a group of 10 sea otters had congregated not far off shore in the quieter waters of the sheltered bay. Some had wrapped kelp around themselves so they could sleep in the water without being ripped away by the currents and tides.

Another had been fishing and found a clam. It lay on its back in the water, put the clam on its chest and was smashing with a pebble to it open. They were close enough that we could hear them whistling and calling to each other.

And while we sat on the rocks looking at the sea otters I realised we were not alone. Hundreds of pairs of eyes were fixed on us. We were sitting in the middle of a colony of California ground squirrels (Spermophilus beecheyi) who used the rocks as both shelter and sunbeds, and burrowed beneath them to create a network of tunnels and cosy holes. They obviously made a good living here by using their cuteness to encourage visitors to feed them titbits, by rifling through bins and grazing on nearby vegetation.

We visited the rock the next day, too and saw more sea otters, though I confess I was more taken with the ground squirrels, even though they are regarded as a pest.

I offered them cheesy crisps and soon found I was very popular indeed!