“I think there's just one kind of folks. Folks.”

“…Shoot all the bluejays you want, if you can hit ‘em, but remember it’s a sin to kill a mockingbird.” That was the only time I ever heard Atticus say it was a sin to do something, and I asked Miss Maudie about it. “Your father’s right,” she said. “Mockingbirds don’t do one thing … but sing their hearts out for us.“ 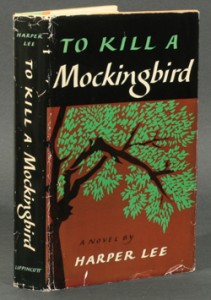 Nelle Harper E. Lee was born in Alabama in 1926 and wrote only one book in her lifetime, published on this day in 1960; the brilliant To Kill A Mockingbird. It won the Pulitzer-Prize and is one of the 20th century’s greatest literary works.

Now 53 years old, the book has been translated into 40 languages, sold 35 million copies, and was made into a film starring Gregory Peck for which he rightly won an Oscar in 1962.

The story of To Kill A Mockingbird confronts huge subjects head-on: racism, class, courage, forgiveness, loss, justice, crime, punishment, death, violence, being a woman, class. Despite being as complex as Dickens and as tragically beautiful as Shakespeare, it is written plainly, simply, beautifully. The story unfolds through the observations of a six-year-old girl, Scout Finch, and it is through her eyes, through laughter, irony and satire we learn what it is to be a decent human being.

Always shy of publicity, Lee considers To Kill A Mockingbird to be entirely self-explanatory and has always shied away from publicity or explanation. “Surely it is plain to the simplest intelligence that To Kill a Mockingbird spells out in words of seldom more than two syllables a code of honor and conduct…” she says.

When in 2011 she was asked why she never wrote anything else, she said: “Two reasons: one, I wouldn’t go through the pressure and publicity I went through with To Kill A Mockingbird for any amount of money. Second, I have said what I wanted to say and I will not say it again.” Now aged 86, Harper Lee is partly deaf and blind, wheelchair-bound and suffers memory loss.

People of faith open their ancient, so-called ‘holy’ books to guide them in life. But for those of us living free of the dogma of invisible sky-gods, we turn to Dickens, Shakespeare and To Kill A Mockingbird for relevant, rational, universal moral guidance. Indeed,To Kill A Mockingbird  topped a 2006 survey of librarians, ahead of the Bible and the Lord of the Rings trilogy.

“I think there’s just one kind of folks. Folks.”