In praise of iguanas

If you visit the Caribbean or South America, you are likely at some point to encounter iguanas. These lizards have walked the earth for millions of years evolving into the magnificent and, I think, exquisitely beautiful creatures we see today. On a recent trip to Ecuador I was able to admire three species of Iguanidae. 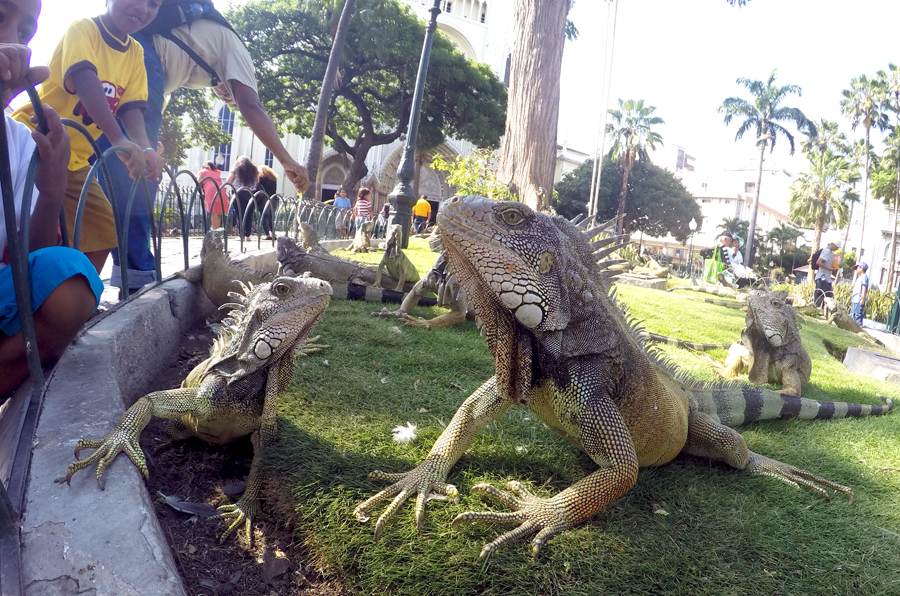 We flew to Galapagos via Guayaquil, Ecuador’s main port city on the Pacific coast, and had an afternoon to poke about a bit. Our hotel was just two blocks from the main cathedral plaza and park, which to our joy was inhabited by a colony of wild green iguanas (Iguana iguana). Although isolated in the downtown city park they made a good living being fed by tourists who could buy small bags of lettuce from enterprising locals. Just like my mum would take me to the river to feed the ducks when I was a child, Guayaquilos would take their little ones to the park to feed the iguanas.

In Galapagos we met handsome Galapagos Land Iguanas (Conolophus subcristatus). Sadly, since Darwin’s day, their numbers have dwindled alarmingly; introduced species – such as cats, dogs, pigs and rats – trash and predate eggs and young. On the islands where there are no invasive species they do pretty well. 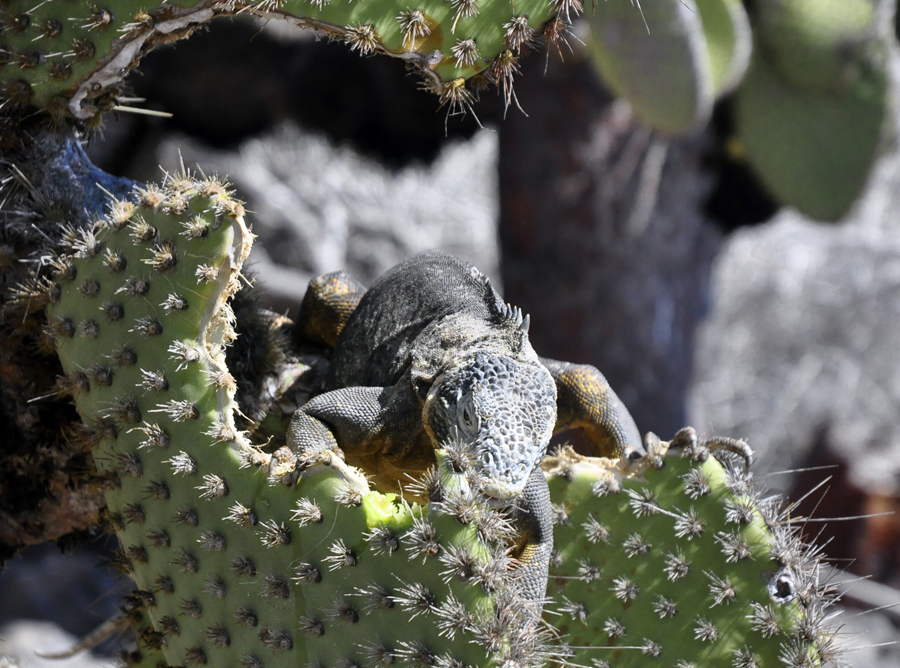 Above: a land iguana on South Plaza Island has braved the spines of an opuntia cactus to tuck into its juicy, crisp flesh. Below: a pair of males, resplendent in bright yellow and burnt sienna costumes scrap viciously for mating rights and territory. Fighting can go on for hours because the winner takes it all. 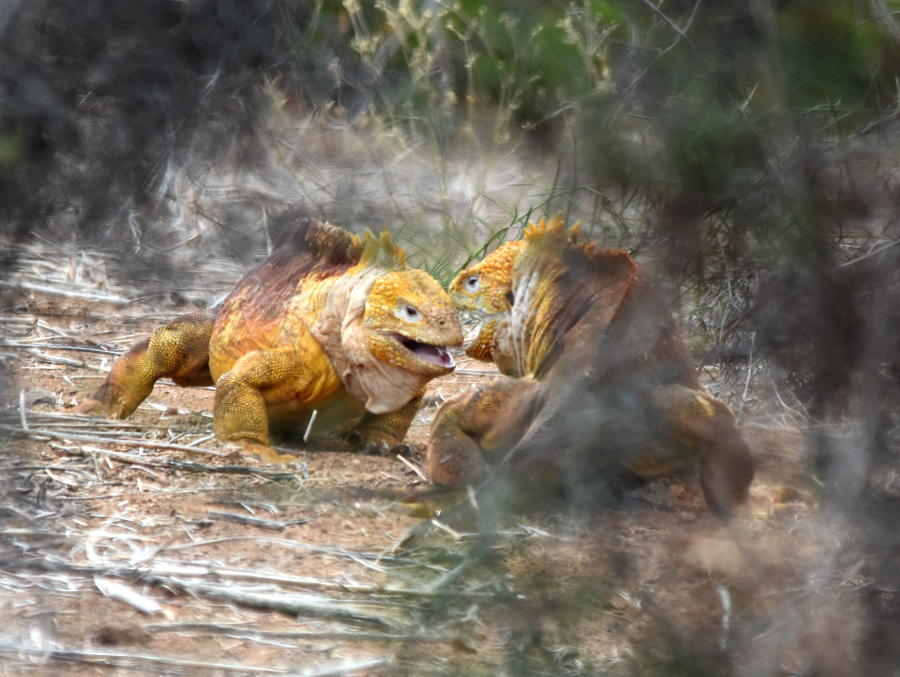 And practically everywhere you go (on the coast) in Galapagos you’ll see the marvellous Marine Iguana (Amblyrhynchus cristatus).

Darwin wrote: “The black Lava rocks on the beach are frequented by large (2–3 ft), disgusting clumsy Lizards. They are as black as the porous rocks over which they crawl & seek their prey from the Sea. I call them ‘imps of darkness’. They assuredly well-become the land they inhabit.”

They don’t care about human visitors, they’re too busy basking in the sunshine, thinking about their next meal of algae, for which they have to dive in to the sea to find beneath the waves. 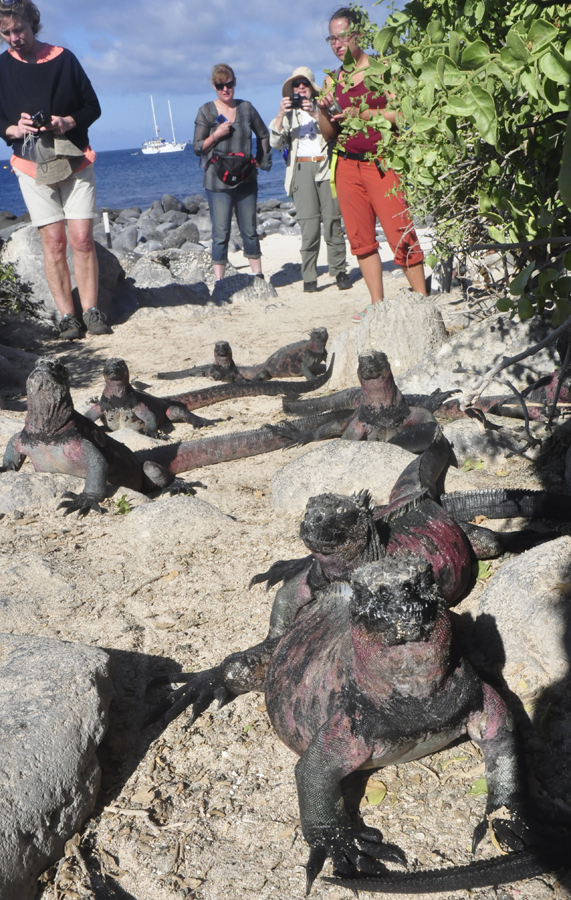 They are the only species of iguana to do this, adapting at some point in their long history to feed on seaweed. They have many predators – on land they are taken by hawks and snakes, in the sea, they are taken by sharks. Pretty much all of the Galapagos Islands have their own sub-species. Below, the marine iguanas on Espanola Island are especially colourful with superb pinky & turquoise costumes.  In 1839 Charles Darwin wrote in the Voyage of the Beagle: “[The marine iguana] is a hideous-looking creature, of a dirty black colour, stupid and sluggish in its movements.”  Sorry, Chas, I don’t agree! 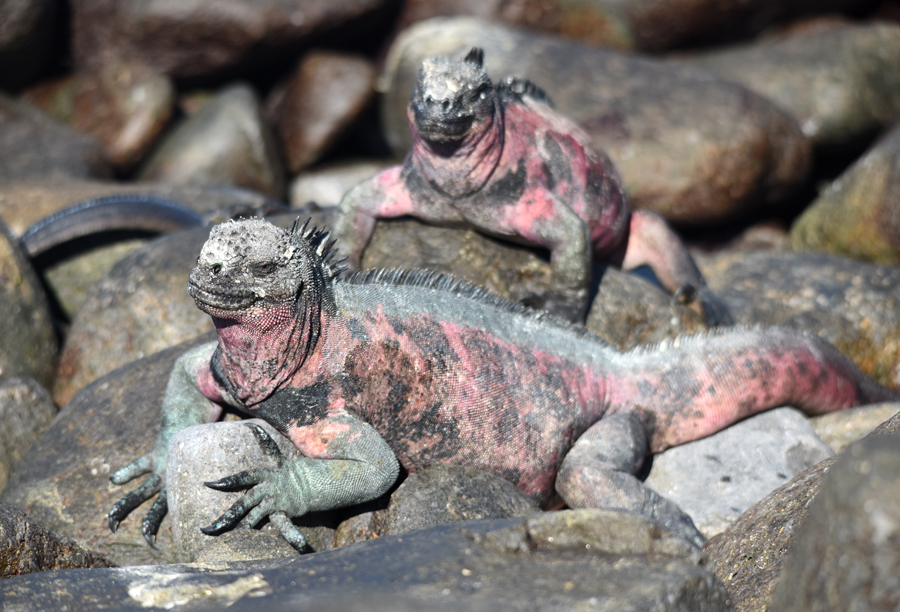 As they feed on ocean algae they take in a huge amount of salt – a fatal level – which has to be expelled. To do this they sneeze it out from cranial salt glands in an almighty and explosive snort. 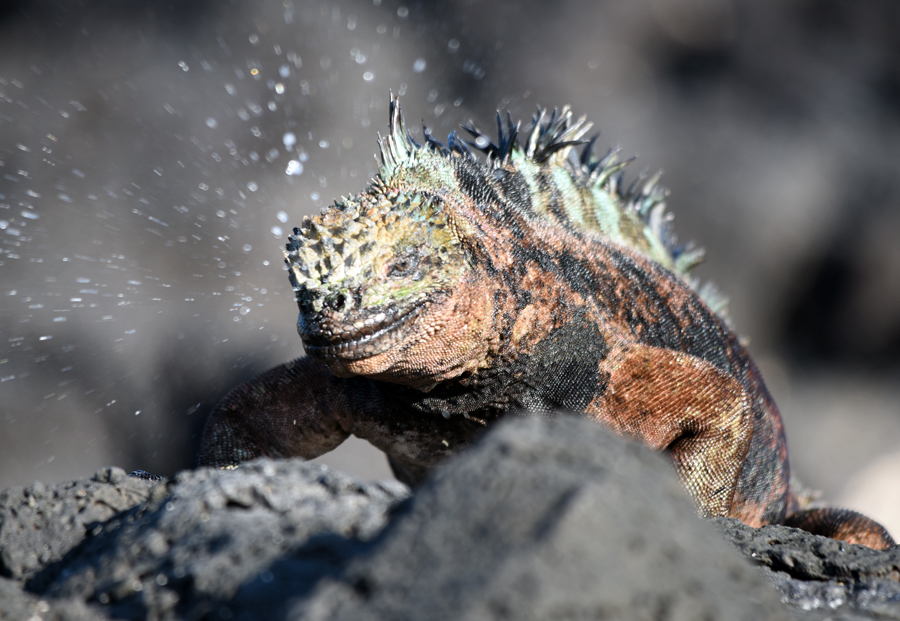