Jeff Beck and Eric Clapton: Together and Apart

Guitar god Jeff Beck is joined on stage at the O2 by Eric Clapton, February 2010

Jeff Beck and Eric Clapton: Together and Apart 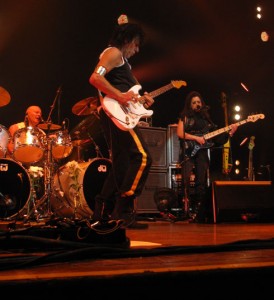 Last night Moth, Rupert and I trekked down to east London to the O2 arena (the former milliennium dome) to see Jeff Beck and Eric Clapton on stage ‘Together and Apart’. Despite defying the rules of both alphabetical order and talent, Clapton was top of the bill on the hoardings and on the souvenir T shirts. It was clear even before anyone had played a note that the big draw was Eric ‘Slowhand’ Clapton, rather than the exquisitely talented Jeffrey Arnold. Rupe is a young guitarist, so this was an essential part of his education. Compare and contrast, my son.

Jeff Beck is one of the most influential musicians in the history of rock music. Jeff’s hands physically play the guitar of course, but the music – the expression and the feeling – seem to ooze straight up from somewhere inside him. And you feel this. His music doesn’t merely touch you, it inhabits you.

Jeff was on first, with his new band. He immediately treated the vast audience to a virtuoso display, ranging from the heavenly delicate sweetness of ‘Corpus Christi carol’ to the funky pumping riffs of ‘Led Boots’, a particular favourite of mine.

He played a set of soaring, emotive tunes, accompanied by the crisp hugeness of Narada Michael Walden’s drums, Rhonda Smith’s bass (boy, has she got the funk) and Jason Rebello’s inventive, playful keyboards. As well as his own marvellous compositions, one of which he said he only wrote four days before, he played other tunes including Nessun Dorma (what a great choice for an encore), A Day in the Life, and the gospel tune People Get Ready. The latter is a song I like very much, but is prone to over-sentimentality; Jeff strips it of schmultz and makes it meaningful again.

Jeff’s new bass player Rhonda Smith was funky, ballsy and sexy, thumping away at bouncing rhythms and driving along the music, partnered by perpetually smiling music legend Narada Michael Walden on drums. They were joined on stage by small orchestra of perhaps 15 musicians whose accompaniment lifted Jeff’s music to still greater feats of originality, imagination, colour and tone.

I’ve seen Jeff play a few times now (Moth’s seen him more times than he can count) so it was quite interesting to see what he would play next, who might join him on stage. The first of Jeff’s guests was Sharon Corr of The Corrs, who I’m told, are quite a successful Irish folk pop band.

The contrasting sound of Sharon’s violin and Jeff’s guitar was delightful and they really set each other off. Next to join Jeff was soul and R&B vocalist Joss Stone. She’s sung with Jeff before and judging by the big smiles they obviously love to perform together.  Her singing style is not one I particularly like; too much screechy warbling and always a danger of going into that unlistenable R&B wobbly sing-around-the-note’ nonsense. Just sing the bloody note and then sing the next one, please. But I digress. Joss sang two songs. The second, ‘I put a spell on you’, she carried off exquisitely and I found myself pleasantly surprised and applauding warmly. Moth and Rupe both unreservedly loved it.

Jeff’s varied, colourful and original 45 minute set was finished in a flash. From memory, we think it comprised: ‘Eternity’s Breath’, ‘Stratus’, ‘Corpus Christi Carol’ (including the orchestra), ‘Led Boots’, from his new album the wonderful ‘Hammerhead’ (with orchestra), the one with Sharon Corr on violin (with orchestra) a little bit of ‘People Get Ready’, one with Joss, possibly ‘There’s no Other Me’, ‘I Put a Spell on You’ with Joss, ‘Big Block’ and finally ‘A Day in the Life ‘ with the orchestra, which was amazing! After a short break, it was the turn of Eric and his band.

Eric Clapton has been viewed by critics and fans alike as one of the most important and influential guitarists of all time – and I’ve often wondered why. I desperately hoped he would come on stage show me his God-like guitar greatness, just as Jeff had just done.

To thundering applause he began with a few acoustic songs, including a slow version of the balls-out rocker ‘Layla’ which he turned into a weak cabaret tune which lacked that great riff entirely. Another couple of slow blues solos, plodding and dull, left me wondering how come this massive audience could be so deluded?

This was pub performer, not a guitar god. Rupe couldn’t believe his ears. “Isn’t this from Toy Story?” he asked me. I thought it sounded no better than a Chas ‘n’ Dave pub sing-a-long, except at least Chas ‘n’ Dave make you smile. I felt embarrassed and a little annoyed at having spent so much on tickets.

But at last he gave me something to enjoy: Bob Marley’s ‘I shot the Sherriff’ and J J Cale’s ‘Cocaine’, which always sound good. This was pub performer, not a guitar god. Rupe couldn’t believe his ears. “Isn’t this from Toy Story?” he asked me. I thought it sounded no better than a Chas ‘n’ Dave pub sing-a-long, except at least Chas ‘n’ Dave make you smile. I felt embarrassed and a little annoyed at having spent so much on tickets.

But at last he gave me something to enjoy: Bob Marley’s ‘I shot the Sherriff’ and J J Cale’s ‘Cocaine’, which always sound good.

The best thing by far about Clapton’s band were his wonderful backing singers: Michelle John and Sharon White.

Then the two of the them – Jeff and Eric – took to the stage together.

They played some classic blues standards which were good, but not great: ‘You Need Love’ and possibly ‘Outside Woman Blues’, followed by the wonderfully cheesy standard ‘Moon River’. Jeff turned the melody into something tender and moving, but then to my horror, Eric wrecked the moment by singing. ‘Little Brown Bird’ and ‘Wee wee Baby’ followed. The Sly and the Family Stone (where was Joss?! )  song ‘I Wanna Take You Higher’ wrapped up their joint set. The encore was Jeff’s embarrassing sing-a-long hit anthem ‘Hi-ho Silver Lining’ which he actually sang. Jeff did it with an air of ‘well, I’ll do it, but you’re not going to like it!’ But we loved it anyway.

Will the real guitar gods please stand up

In the same way that some people might consider a game of golf to be a good walk ruined, I was left with the overwhelming feeling that this was a good Jeff Beck gig ruined; in this case by the massively over-rated Clapton. Perhaps I’m missing something? Clapton’s zillions of fans will think so. I was willing Clapton to show me his worth. But it was clear to me as Jeff and Eric played together that Eric lacks the tenderness, originality, depth and nightingale-like fluency of Jeff. Yes, Eric can play perfectly nice blues guitar, but not nearly so well as the old guys who died in poverty whose genre he adopted.

As there is no such thing as god, Clapton clearly cannot be god. Clapton is a good blues guitarist with a pleasant and clean guitar sound. And yes, I’d want him in my band. But solo performer? No thanks. All he has is a big name thanks to some 1967 graffiti. Let’s get over The Clapton Delusion and stick to what our ears really tell us. For any Clapton fans out there who are deeply offended by this blasphemy, may I be so bold as to suggest you immediately try Jeff Beck’s album ‘There and back’, give John Lee Hooker a whirl, listen again to that old Allman Brother’s album ‘Eat a Peach’ and then treat yourself to some tickets to see Nick Harper on his forthcoming tour.

The terrible price of Kenyan flowers