An exhibition of works by the most unsung of British artists 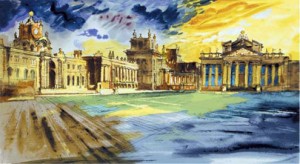 I was unfeasibly delighted when I heard that a number of paintings by John Piper (1903 – 1992)  were to be shown at Blenheim Palace, just five miles from my home. My mum and stepfather work there as guides so I had a guest pass to view the show.

Although John Piper is a giant of 20th century British art, you may not have heard of him. His work crops up in a few public collections, but there are many in private collections, like the Duke of Marlborough’s at Blenheim.

Piper’s creative output was astonishing. Not only did he paint, he also designed stained glass windows (notably the windows for the new Coventry Cathedral), made ceramics, tapestries, screen prints, etchings, drawings, and wrote and illustrated books, notably the Shell guides of the mid-20th century when he worked alongside poet John Betjeman.

Piper is primarily known as a painter of landscapes featuring architecture, palaces, monuments and churches. If this sounds a bit dull, don’t switch off, viewers; Piper’s magic lies in his free and spontaneous drawing – squiggles, daubs, lines and blocks – combined with glowing colour and the blackest blacks.

And he’s wildly, bravely experimental, but not in a ‘hey-let’s-put-a-shark-in-a tank’ kind of way. He’ll mix watercolours, inks, oils and wax resist on the same sheet and make a compostion that sings and resonates. And he makes it look so very easy.

If you fancy a day out in Oxfordshire this spring you could do worse than check out Piper’s pictures at beautiful  Blenheim Palace. The Palace is bright yellow and breath-takingly lovely. And it’s chock-full of really interesting stuff. I particularly like the freaky eyes painted high on the ceiling of the porch. Loveliest of all though is the parkland designed by Capability Brown. OMG that’s nice. No wonder Piper liked it here.