Swimming with dolphins in Kaikoura 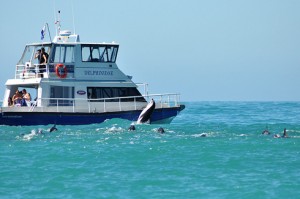 Moth and I fell in love with the little town of Kaikoura on the east coast of New Zealand’s South Island. Until very recently it was just another sleepy coastal settlement, with a bit of a crayfishing going on, but mainly it was a hub on the main road south for the livestock farmers in the nearby hill country. Its location with jagged snowcapped mountains running straight down into the sea, a grassy peninsula, rocky beaches and sandy bays was largely overlooked.

But then someone started running tours for visitors to swim with dolphins and sea lions, watch whales and albatrosses, and the village has grown into a lively small town with a real buzz and pride in itself and its marine species. 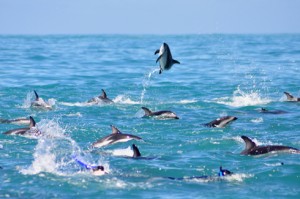 Lists of ‘things to do before you die’ (why not make that while you live?) nearly always include swimming with dolphins. If I did have such as list, which I don’t, I would now be able to cross that one off, thanks to this company in Kaikoura.

15 February 2009; I’d picked a good day for my swim with the dusky dolphins: the sun shone, the air was warm and the swell in the sea had largely died down from the previous day. After donning wetsuits and snorkelling paraphenelia, a little boat took a small group of swimmers and watchers including me and Moth for a 30-minute ride into the sparkling blue Kaikoura bay and slap bang into the middle of a pod of perhaps 500 or more dusky dolphins (Lagenorhynchus obscurus) a small cetacean less than 2ms long with lovely stripey markings.

When the boat’s klaxon sounded the swimmers piled in! Those who know me well will know that I’m always the first one into the water. And so it was.

The visibility was poor, perhaps 2ms at the most, but that is quite sufficient when you’ve got your face in the water to see the black, white and grey stripes of the dolphins whizzing past. 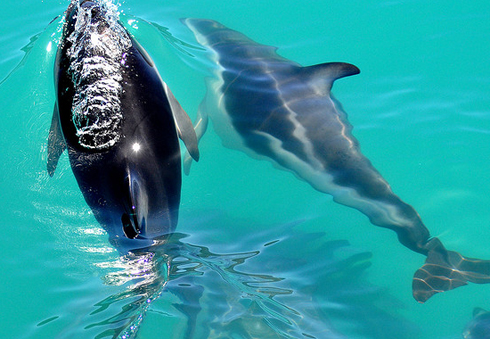 On a few occasions a dorsal fin or a tail touched me. If you’re quick you can see them watching you and follow their gaze. Some turn and come round for another look, but it depends what song you’re singing. Yep, you have to sing to them. The dolphins won’t hang around without good reason; they have important dolphin business to attend to. So it’s up to swimmers to attract their attention and keep them interested. Swimming hard in open sea with a snorkel in your gob and a mask on your face, while simultaneously singing and trying to take in the wonderful sight of dolphins swimming all around you is surprisingly bloody hard work! I sang the chorus of Bill Bailey’s comic prog rock song Insect nation and Focus’s classic Sylvia, though in the latter the yodelling section proved impossible underwater. Lots of dolphins kept swimming round me so I guess they liked it. I must remember to tell Mr Bailey.

It’s all the more dramatic to see it happening at their level rather than from the deck of a boat. You can appreciate the height of the leaps much more. Yes, swimming with dolphins is as amazing as you imagine.

Amazing photos by my amazing husband Moth Clark. Check out more of his dolphin photos on flickr here.