Kate Bush live - Before the Dawn

Thirty-five years after her previous live shows, Kate Bush stepped out onto the stage of  London’s Hammersmith Odeon to rapturous applause from an audience which included us. This was the 19th of 22  shows of “Before the Dawn”.

I already knew which songs she would perform and in what order as we had found a recording of the show online which we have repeatedly listened to. But the performance was so much more than just a regular gig; knowing which song was coming next allowed me to focus on other aspects of the show.

It began as a fairly straight gig (though with stupendous lighting) with Kate, a seven-piece band and five backing singers including Kate’s 16-year-old son Bertie. But it soon morphed into something else; an experience that was part rock concert, part theatre and part performance art installation. Kate has always done it her own way. Long may she continue to do so. 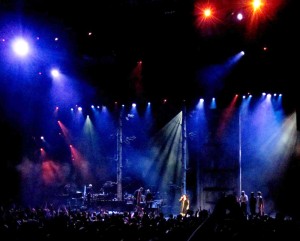 At the end of show Kate bathes in the love and enthusiastic applause of her amazed fans. Photo: Moth Clark

I took my new binoculars, which I had bought primarily for bird and wildlife watching, to better see the minute detail on stage, and there was much, much extraordinary detail to observe. It prompted me to think: ‘A Bush in bins is worth a bird in the hand.” It was.

In the first half Kate performed in its entirety “The Ninth Wave”, a song suite from “Hounds of Love” which tells the story of a woman lost at sea in a shipwreck. Film, theatre, dance, mime, life jackets, flares and awesome lighting  and sonic effects together produced a complete experience of darkness, menace, loss and pathos. Giant waves engulfed the stage. A search and rescue helicopter shone its beams down on to the audience. Kate was gathered up from an illuminated giant marker buoy to be carried away by scary sea creatures.

What a lovely afternoon

In the second half Kate performed in its entirety “Sky of Honey”, a song suite from “Aerial” which describes a lovely afternoon and sunset. It’s my absolute favourite thing she has ever created. Indeed she might have written it especially for me, combining as it does my love of birds, nature and art. Giant slo-mo British birds flew in front of my eyes, cloudscapes scudded past, archers fired arrows which turned into swallows, murmurations of starlings danced, an artist’s mannequin puppeted slowly around the stage, Bertie painted and “all the time the light is changing.” At some point during Prelude and Prologue, with the theatre filled with birdsong I found myself overwhelmed and tears pricked my eyes.

The audience respected Kate’s pre-show request not to use their cameras or phones during the show. Now I understand why she said “…it would allow us to all share in the experience together.” What an experience! Time warped. Three incredible hours of pure beauty passed in minutes.

The Battle of Hastings and the Norman Conquest - 14 October 1066