A visit to the 'lost city of the Incas', Peru. 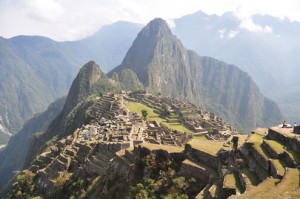 Lost city of the Incas, found

Of the many iconic sights the world has to offer, Machu Picchu is on the ‘A’-list, up there with the Taj Mahal, the Pyramids and Petra. And so we knew that it would be a highlight of our trip to Peru last month.

The legendary ‘lost city of the Incas’ is surprisingly modern in the scale of things, built c1450 at the height of the Inca empire. When the Spanish destroyed the empire just over 100 years later Machu Picchu’s residents were probably wiped out by smallpox, a disease the Spanish brought with them. Of course, the native South American population had no immunity so it would have wreaked havoc. Yet so remote is Machu Picchu, that although Spanish germs got there, the conquistadors never actually did. So the city remained in superb condition, reclaimed by the mountain jungle.

It’s not an easy place to get to; not like the Pyramids (just fly to Cairo) or Petra (fly to Amman and get a bus) the Taj (fly to Delhi, take a train). But it is worth the effort. Indeed, perhaps the pilgrim-like effort heightens its appeal. For Machu Picchu is built at one end of a steep, deep valley, on a precipitous mountain top, at nearly 8,000 feet above sea level in dense jungle. No wonder it remained unknown, except by a few hardy locals, until 1911.

We boarded the train in the Sacred Valley at Ollantaytambo and it rumbled slowly through the deep valley following the spectacular river Urubamba to the rail head at the tourist town of Aguas Calientes.

Some people got off at wonderfully remote stops along the way to walk to Machu Picchu on the old Inca trail which was, 600 years ago, the only way in and out. As the train climbed higher and deeper into the mountains, the vegetation changed from chaparral to jungle. Tall broad-leafed trees clung to the, in places, vertical mountain sides and orchids bloomed purple. A toucan flew overhead. A cloud of parakeets. It was a different world.

From Aguas Calientes a bus takes you on the twistiest-turniest road ever up to the entrance to the site.

You glimpse Machu Picchu’s terraces as you climb, but it is not until you actually enter the site that you are faced with this:

From here you can begin to understand the scale and complexity of the city.

I wasn’t prepared for the size of the city. Hundreds of ordinary people had lived here in large, beautifully built, orderly houses.

And I wasn’t expecting such steep terraces. You could have just stepped off them and into the gaping chasm below. (A French tourist did just that two days before we got there and lay injured and discovered for 48 hours!)

The terraces were once intensively farmed, watered by a complex irrigation system. Today the grass is cropped by specialist Peruvian lawnmowers – llamas.

Some even pose for you.

There were lots of tourists there, but the whole place is so vast, I hardly even noticed them.

Inevitably for a city built on a pointy mountain top there are steps everywhere. Happily, the Peruvians have resisted the modern curse of over-zealous health and safety measures of endless rope and metal barriers and warning signs. Visitors are allowed to take their chances and trusted to be sensible (despite folk like the French tourist I mentioned earlier!)

With steps like these confronting you at every turn, you have to take your time getting around the place, but that’s good – it forces you to stop and look… at these gorgeous orchids for example:

As well as the llamas there is plenty of other wildlife up here. The air was alive with spectacular screeching, swooping swallows and martins, making a good living on the numerous insects, many of which made a good living from us. We were bitten to pieces despite the liberal application of anti-mozzie products. Most thrillingly, living up here among the rocks is a colony of viscachas (Lagidium peruanum) a sort of rabbit-like cousin of the chinchilla with super-soft fur and meltingly cute faces.

So many places in the world, even remote ones where hardly anyone lives, are full of litter. Empty water bottles, rusty cans, plastic bags…but here there was not a cigarette butt or sweet wrapper to be seen. What a joy.

While I hiked up to the Sun Gate (in that heat? with those mozzies? at this altitude? Madness!), Jane sat and made some gorgeous quick sketches: