A visit to the Santiago house of poet Pablo Neruda.

Known as the Chilean ‘Shakespeare’ and revered as that nation’s conscience, Neruda was a collector of really interesting stuff, which is on display in his former home, now a museum, in Chile’s capital city Santiago, which we visited in 2011. Guided from room to room, we admired the eclectic architecture, the magnificent paintings, the books, the weird bric-a-brac and the quirky decor. And suddenly, as we stepped into a tiny dining room designed like a ship’s galley, I was whooshed through a portal into a different space/time continuum.

Boom! I was unexpectedly transported back to 1971! Blimey!

I was an eight-year-old girl again, clutching my mother’s hand, walking in the rain up The Parade in Leamington Spa towards Lee Longland’s furniture shop where there was a cafe where mum liked to go for a ‘nice coffee’.

Standing there in Neruda’s house, temporarily unable to speak, I couldn’t coherantly explain my excitement to my husband: “It’s… Wow! … I can’t believe it!… Oh!” It took me a moment to collect my thoughts and realise what had happened. On the table in front of me was the very same crockery they used four decades earlier at that cafe in Leamington. Back in 1971, as an 8-year-old, it was the most beautiful and exciting design I’ve ever seen. So modern! No vintage, chintzy porcelain cups and saucers here! No drab utility green and cream crocks; you know, the kind of thing seen in every school staff room, on every hospital kitchen trolley and in every village hall across the land. No! This was bright and fun and covered in big bold colourful birds and flowers. It could have been designed especially for me.

I’d never seen it since, though occasionally, when painting birds and flowers I had a vague visual memory of it. And 40 years later, laid out on a table in the house of a dead poet in Santiago de Chile; there it was again! A whole tea service! 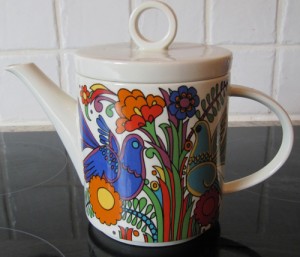 I didn’t know what the crockery was called or who made it, but I felt certain that as soon as I got home and told my mum, she would know. Sure enough, mum remembered immediately and found out the design was called ‘Acapulco’ by Villeroy and Boch. No longer commercially manufactured, I promised myself that as soon as I had a few spare quid, I would track down a piece of Acapulco to own myself, to remind me of my childhood, my mother, and that lovely afternoon at Pablo Neruda’s house.

Once back home, I won my eBay auction and I have my own Acapulco teapot. Everyone knows that tea tastes better out of fine china. And this is the finest, being also a time machine and portal into long distant worlds. How refreshing!

Ode to a box of tea by Pablo Neruda

“Box of tea, like my own heart you arrived bearing stories, thrills, eyes that had held fabulous petals in their gaze and also, yes, that lost scent of tea, of jazmine and of dreams, that scent of wandering spring.”