Afghan revolutionary, kidnapped and murdered on 4 February 1987 for fighting for women's rights

In 1989, as a 26-year-old, I first truly understood what it was like to be disrespected because I am a woman. Although I was modestly dressed, I had dared to walk down the street on my own in a village in the mountains near the Khyber Pass. I was spat at and had stones thrown at me. I felt powerless, belittled, dirty and afraid.

Women’s equality is still a long way off in most countries, but women from certain parts of the world have so much further to go. Our Sisters in Afghanistan, for example, can still only dream of being able to get an education or medical care, or be treated with common courtesy, let alone go out for coffee with friends or even wear nail varnish without the threat of having your fingers cut off. 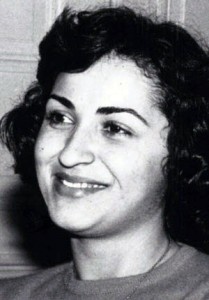 These basic human dignities are what Meena Keshwar Kamal spent her short, brilliant life fighting for. She died on this day – 4 February 1987  – having been kidnapped and murdered at the age of 30.

Ten years earlier in 1977 aged only 20, Meena founded RAWA, the Revolutionary Association of the Women of Afghanistan, in her hometown of Kabul. Its mission was to “give voice to the deprived and silenced women of Afghanistan”, a country where institutional misogyny runs deep and ugly in tribal, political and religious guises.

RAWA was, and still is, an organisation fighting for human rights, social justice, democracy and secularism. Meena’s basic principles are simple, humane and inspirational – and are therefore deeply threatening to fundamentalists, imperialists and other control freaks. It was Meena’s uncompromising campaign against the occupation of her country by the Soviets that made her the target of assassins from the Afghan KGB and their fundamentalist Islamist partners in crime.

Meena understood the power of knowledge and how women had had it systematically denied to them. She knew that if women could read and write they could make a difference, stand up and have their say. With RAWA she began to run literacy programmes. Soraya, a widow of 50, understands: “If you are illiterate, it is as if you are blind.” RAWA established orphanages, ran health programmes, gave medical care, and distributed food and aid to women who had been widowed, abandoned or forced into prostitution by economic hardship.

“Meena didn’t just give me an education; she taught me that I had the right to live a better life,” said Sahar Saba, a student at a RAWA school.

After Meena’s murder, RAWA women retreated underground to continue their perilous and vital work. To protect themselves they have no single leader but instead direct activities in turn and in secret. They have much to fear. The Soviet enemy is long gone, but has been replaced by brutal Taliban filth who mete out barbaric punishments under the hocus pocus of twisted Sharia law. Only last week a BBC report showed the stoning to death of 25-year-old Siddqa, found ‘guilty’ of adultery.

Of all the atrocities committed in the name of religion or nationalism, the subjugation of women is up there with the most heinous. Armed with Meena’s vision, RAWA continues its struggle exposing hate-crimes, hypocracy and injustice. The resilience of women is embodied by the spirit of Meena. And so we stand with today’s brave sisters of RAWA and salute you, Our Sister Meena!

This post also appears on Dorian Cope’s blog On This Deity.