The self-immolation of Mohamed Bouazizi

The self-immolation of Mohamed Bouazizi – 17 December 2010

What a magic carpet ride it was for our brothers and sisters in North Africa and the Middle East. Egypt’s Mubarak-led police state deposed, Libya’s mad dog Gaddafi fittingly gunned down in a sewer. And the struggle continues for reform in Bahrain, Yemenis fight for their rights, and brave and bullied Syrians continue to rise up against the barbarism of Bashar al-Assad’s evil regime, despite appalling hardships.

The so-called Arab Spring signalled such hope for the future! And it was sprung on this day in 2010 when a young fruit-vendor immolated himself on the streets of a small rural town in central Tunisia. 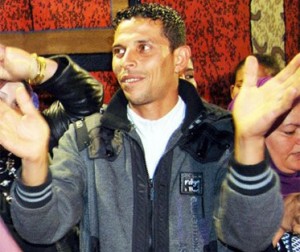 Born in 1984 to a working class family, Mohamed Bouazizi became the sole provider for his family at the age of 10. Honest, hard-working, responsible, he was a young man that any family would be proud of. Everyday he would buy fresh produce with what little money the family had, wheel his wooden barrow a mile to the souk and resell the fruit and veg for to make just enough dinars to support his mother, younger brothers and sisters, his uncle, and his sister at university. With unemployment rampant, he was glad to have any work at all.

Since he was a boy he’d been repeatedly harassed and bullied by municipal officials, with no recourse to the law. Tunisia’s government, run for 23 years by President Zine El Abidine Ben Ali, was corrupt to the core. Local police would knock over his barrow, extort money, steal his fruit, or fine him for not having the ‘correct’ market permit. In the morning of 17 December 2010, a policewoman confronted Bouazizi as he made his way to market. She wanted to confiscate his scales but he was having none of it. The policewoman slapped and spat at him, shouted insults and forced him to the ground. Her colleagues beat him. He was humiliated and could take no more abuse.

He ran to the governor’s office to complain about his treatment, but no one would see him. He shouted: ‘If you don’t see me, I’ll burn myself’. An hour later, Bouazizi stood outside the governor’s office, poured petrol over himself, called out “how do you expect me to make a living?”and struck a match. Local people ran to help, the flames were put out and he survived – just – but suffered appalling burns to 90% of his body. He would never recover consciousness. He was taken to the local hospital and later transferred to a larger burns unit in Sfax.

Bouazizi’s family, friends and neighbours staged a small protest in the town at the way their son had been treated. Such dissent was not tolerated in Tunisia, and would almost certainly lead to arrest or beating. But they’d all had enough. Many of the young people protesting recognised in themselves the desperation Bouazizi felt, but this time they had a secret weapon: the internet. Armed with mobile phones and wi-fi, they filmed the protests and uploaded them to YouTube and Facebook. Video clips spread virally and were soon broadcast by influential international satellite news channels such as Al Jazeera. The outcry was deafening.

Tunisian forces tried in vain to silence the protest but the genie was out of the bottle. Twenty-six-year-old Bouazizi died of his injuries on 4 January 2011 a martyr and inspiration to the Arabic-speaking world. Ten days later on 14 January 2011 Ben Ali stepped down and escaped to Saudi Arabia.

Inspired by the shining Tunisian example, people in other countries – not just young people but ALL people – felt the same frustrations. Protest became a popular uprising with Friday prayers as the rallying point. The next stop Tahrir Square, Cairo. Arabian nights would never be the same…

UPDATE …but only temporarily. No one seemed to anticipate that the terror of so-called Islamic state would rush in to fill the power-vaccuum. The value of Mohammed Bouazizi’s self-sacrifice seems to have been wiped out by these evil, deluded, murderous scumbags.