So many fascinating species to observe 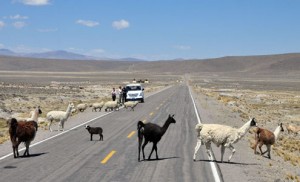 Our trip to Peru earlier this month was punctuated with sightings of all kinds of wildlife: birds, insects, lizards; and although we saw no big predatory land mammals, such as jaguars, we glimpsed many other fascinating mammals.

I suppose when most people think of South American mammals they think of the iconic domesticated camelids: the alpaca (Vicugna pacos) and the llama (Lama glama). We saw these creatures just about everywhere away from the coast.

They are kept for their incredibly soft thick wool and their tasty meat. Llamas can be used as pack animals, but apparently if you load them up with more than about 30kilos, they just sit down and won’t move. Who can blame them? Isn’t that donkey-work?

Vicunas (Vicugna vicugna) are graceful and pretty like deer and are probably the undomesticated precursor of the alpaca. 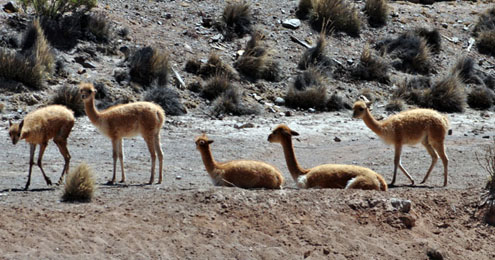 They live at absurdly high altitudes and have evolved the softest, thickest, warmest wool of all the camelids. Wild herds are rounded up every few years and shorn. Garments made of vicuna wool fetch huge prices. Personally, I think vicuna wool looks more gorgeous on a vicuna than human.

We got good views of the South American sea lion (Otaria flavescens) at the Paracas National Reservation. 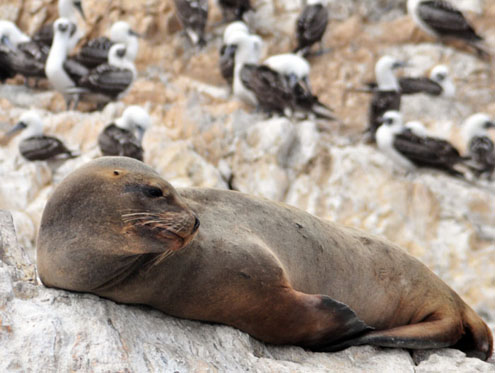 Here, at a number of offshore islands, they still harvest the seabird guano every couple of years. The stench is overwhelming as you approach, but it’s worth tolerating to be able to see the numerous sea lions surrounded by cormorants, Peruvian boobies, Humboldt penguins, Inca terns and pelicans.

For me, South America means rodents of all shapes and sizes, and of varying degrees of cuteness: from just a mild ‘ahhhh’ to a heartmelting squeal.

Wild guinea pigs (Cavia porcellus) were domesticated and have been bred for the table since pre-Columbian times. Speedy breeders and quick to mature, they’re easy to keep and provide tasty protein. I didn’t try any, but I have to say that as my fellow-diner’s plate arrived, the little creature splayed out all brown and crispy on the plate looked and smelled absolutely delicious. We only saw one wild guinea pig, scurrying around at an archaeological site, but that was good enough for me. 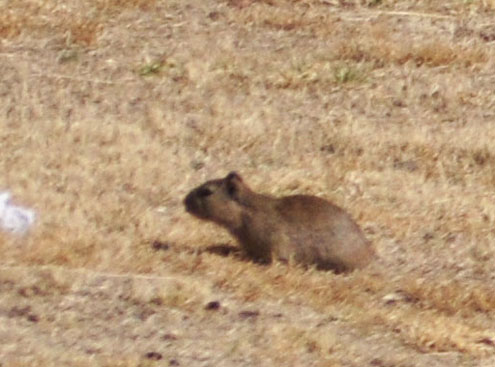 The llamas and alpacas living at Macchu Picchu…

…acting as lawn mowers on the steep terraces, share their home with a resident colony of viscachas (Lagidium viscacia). 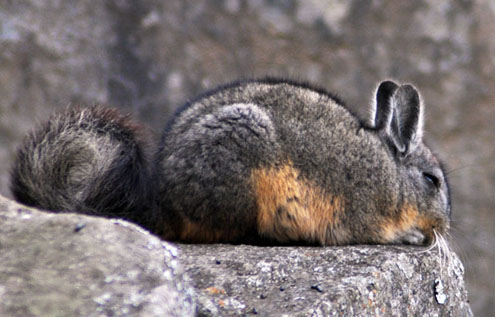 These achingly pretty rodents, about the size of rabbits, make a good living on the steep ledges and Inca walls, out of reach of all the tourists. I wish they’d come and live at my house. 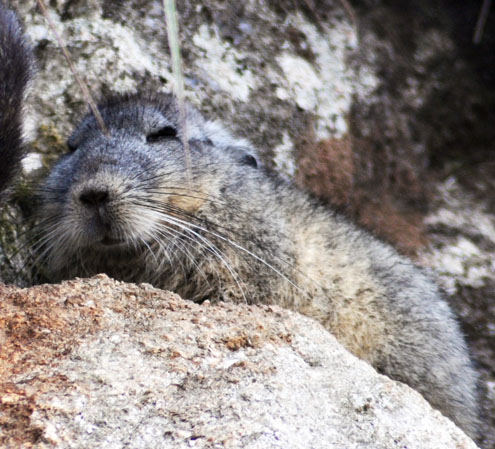 How sweeeeet is that? Those whiskers were made to be tweaked!

I quietly hoped (but never expected) to see the largest rodent of them all. But there, in the jungle, grazing on the banks of the Tambopata river were a small family of capybara (Hydrochoerus hydrochaeris). 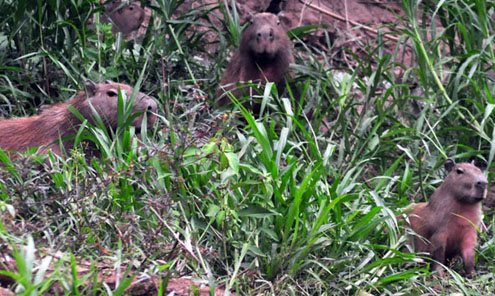 They are semi aquatic and fulfil the same evolutionary niche as hippos do in Africa. This one has a cowbird riding on its back, helpfully picking off ticks and parasites: 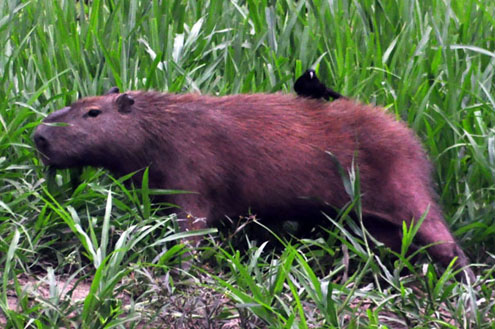 But best of all was a privileged glimpse of the giant river otter (Pteronura brasiliensis);  shy, endangered and beautiful. Hunted mercilessly for its silky pelt and now threatened by habitat loss, this is one animal I never expected to see in my life. And there they were, a family of seven, fishing for piranha in a peaceful oxbow lake at sunrise. 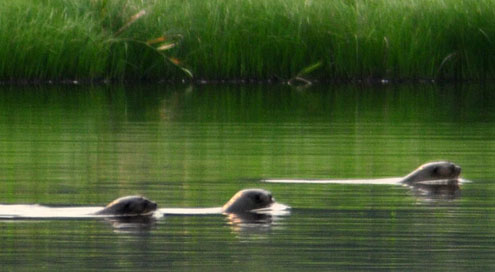 We shared their world for perhaps one magical hour, before they disappeared from view beyond the reeds.