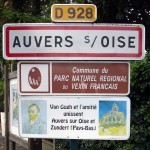 I first went to Auvers sur Oise back in 1982 as a 19-year-old art student. In 1997, I returned to see how the old village had changed. Since taking up my brushes the previous year, I was anxious to study Vincent’s vision directly from the motif.

The inhabitants of Auvers appear to be very proud of their famous visitor. Large, yet unobtrusive boards displaying reproductions of Vincent’s works (and also Cezanne’s) have been erected around the village near to the sites that they portray, excellent for the casual visitor, who may not be familiar with some of the studies. Most of these appear to be accurately placed, although I have my doubts about certain locations.

As there is only one Town Hall, the site of “La Mairie” is obvious, but “Thatched Cottages at Cordeville” was more problematic to locate precisely. The junction at Cordeville is so changed that I wasn’t able to identify exact buildings. Certainly the spirit of the old village is still present and it is easy to imagine what it must have been like, but what Vincent saw as vegetable gardens and allotments between the road and the river Oise is now built up with expensive middle class homes with tubs of geraniums and well-watered lawns.

The church remains virtually unchanged from when Vincent saw it. The belfry slats, so clearly seen on Vincent’s painting are now gone, revealing the massive internal timber structure from which the bells are hung. It’s simple to find the exact point from where Vincent must have sat to paint his vision of the church. It’s at the rear of the church, on the lane that leads up the hill towards the cemetery.

Interesting to note that he chose this view, and not the other side featuring dramatic flying buttresses and beautiful rose window, or the old, uneven steps leading up from the Rue Daubigny, which Kirk Douglas ran down in “Lust for Life” a Hollywood biopic of Vincent’s life. The rear view must have reminded him of the chapel at Nuenen in Brabant where he and his parents once lived.

As I began my own composition, it quickly became clear to me that his drawing is extremely accurate indeed, in correct proportion in all respects with the exception of the tower, which he has shortened to fit in his canvas. The genius of his composition lies in the rendering of the lines of the church apparently in a tortured, expressive way, and yet when measured, they are devastatingly precise.

Clearly the church does not writhe in the way Vincent shows us, but in trying to express it myself, I began to learn more about his way of seeing. A truly fascinating exercise in which I glimpsed some of the way Vincent’s mind must have worked.

Whilst I was sitting there painting, I was frequently disturbed by visitors, Japanese, German, French, American, but no-one paused for very long, usually just long enough to take a photo. No one seemed to take the time to look, to really look, I mean…

I took the short train ride from Auvers to Paris to see the Vincent’s painting of the Church at Auvers at the Musee d’Orsay and having now seen so many of his pictures, I wasn’t surprised to find that the real thing is more sumptuous, more radiant than you can possibly imagine. The colour seems alive!

It never fails to thrill me to walk up the sunken lane which rises past the church, through the back of the eastern end of the village towards the cemetery, to visit the graves of Vincent and Theo.

The graves are a delightfully simple affair. But don’t get too dewy-eyed. It’s too easy to over-romanticise Vincent’s story, and for the tragedy and despair of his final months to become more prominent than the study and appreciation of the body of work we have inherited.

This is my quick doodle of the cafe where Vincent lived in 1890 and finally died on 29 July 1890. When I visited in 1982 it was called the “Cafe van Gogh”, a relaxed and simple French cafe/bar. I remember sitting outside drinking a lot of beer and when I had drunk enough to summon the courage, I asked the barman if he would let me see “la chambre de van Gogh, s’il vous plait”, which he did.

In 1997, I find the place is much changed. It has now become a visitor centre, with a proper ticket office, gift shop and multi-media display in various languages.

Vincent’s room is unchanged and remains as oppressive and dismal as ever. The guide proudly showed me the holes in the plaster on the walls, reputed to be where Vincent drove in nails to hang his pictures. The front part of the Auberge is now a pukka restaurant, tastefully restored to an 1890s style. The exterior of the Auberge has also been restored and looks wonderful.