in Auvers-sur-Oise, near Paris

Dr Paul Gachet lived in Auvers-sur-Oise, just north of Paris, and combined his private medical practice with a love of art and mixing with artists of his day.

In 1890, when Vincent van Gogh moved to Auvers, Gachet was a widower with two teenage children: Marguerite and Paul. Vincent moved to Auvers specifically because of its artistic history and because he could be kept an eye on by Gachet (even though he was away at his practice in Paris for much of the week: work that one out! )

Gachet was probably a bit of a quack. He was interested in alternative medicines and mental health but did little to help Vincent who needed time, reassurance, a proper diagnosis and drugs which had yet to be developed, rather than useless homeopathic witchcraft. Vincent was possibly beyond help by this stage anyway, but his comments about Gachet are telling. He says he thought that “Gachet is sicker then me.”

For me, the name Gachet is synonymous with something dodgy: there is plenty of evidence that Gachet and his son traded off his van Gogh connection for the rest of his life. Indeed, it is likely that his good-for-nothing leech of a son faked a load of paintings and palmed them off as Vincent’s. But that’s another story!

In my previous trips to Auvers, I had managed to find Gachet’s house but as it was always privately owned and closed to the public, I had never seen inside. Since I was last here, the local authority has bought the house and turned it into a museum.

The whole property is perched high up on a steep terrace of the Oise valley, with the garden terraced into small areas for flowers and vegetables. 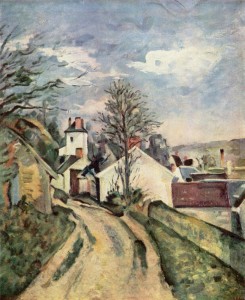 Cezanne made a painting with Gachet’s house in it – it’s the tall one in the middle left:

Now we were here, we had to go in and check it out.

In the garden, beneath a perspex cover, stands the red table:

This was in daily use at chez Gachet being the table which Gachet leans on in the portrait Vincent painted of the doc in June 1890:

Another interesting exhibit is the piano in the drawing room.

This piano is – apparently – the one Vincent painted 17-year-old Marguerite Gachet playing:

It looked pretty similar to me. I spotted this nice photo of Marguerite Gachet as an old woman in 1947 playing the same piano.

Upstairs is Gachet’s etching press, or one very like it:

…on which Vincent made his one and only etching, a portrait of Dr Gachet:

There are 61 known impressions of the copper plate – read more about it here – but many were made after Vincent’s death, by Gachet’s parasitic son, profiting on his tenuous van Gogh connection. 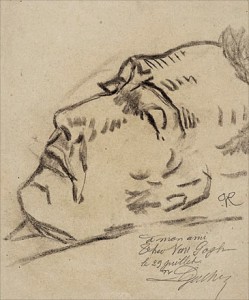 Gachet made this sketch of Vincent on his deathbed.

I was delighted to have seen Gachet’s house and pace out how far Vincent had to walk to get to it from his end of the village. But I felt uncomfortable at perhaps being part of the over-aggrandisement of the Gachet family and their connection with Vincent.

They hardly really knew him, after all.

Another postcard from Auvers-sur-Oise, where Van Gogh killed himself

Vincent's cafe terrace then and now