Where in 1883 Vincent van Gogh spent two lonely months, but where says he learned to paint 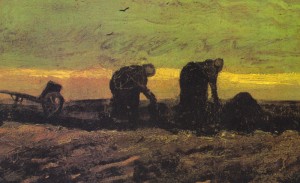 Drenthe is a remote province in the far north east of the Netherlands.

Vincent van Gogh went there in October 1883 in search of peace, inspirational landscapes and rural workers who he could paint to satisfy his craving to be a painter of peasants. He went to Nieuw-Amsterdam, a tiny village where he stayed for two months.

He found the landscape to be as rough and rural as he’d hoped but the people here were hostile and he became extremely lonely.

He made studies of the sowers, turf-cutters, bargemen and diggers in their darkly beautiful land. This is a much-overlooked and misunderstood period in Vincent’s early development as an artist. It was here Vincent himself said that he taught himself to paint.

The white building is the Logement Scholte in Nieuw-Amsterdam, the house where Vincent lodged during his stay. The van Gogh Foundation restored it from near dereliction for the 150th anniversary of Vincents birth in 2003 to make and a small visitor centre and an excellent cafe.

The lifting bridge in 1883 as Vincent painted it… and today.

The lifting bridge Vincent saw is gone, replaced with a metal construction, but the line of the canal is unchanged, as is the crossroads.

It wasn’t hard to imagine Vincent disembarking from the sailing barge right here, thinking to himself “this’ll do” and crossing the road to the Logement Scholte.

His unkempt appearance initially raised concerns but when he quoted the bible and told Mr Scholte his father was a Pastor in Brabant, he was allowed to stay. Vincent set straight to work in the landscape recording the labourers, their cottages, and the bleakness of the landscape.

His work from this time is not pretty.

Instead, admire their somber mood, grunting rawness, and the sweat to express the harsh reality and dignity of the men and women working this landscape.