The Parsonage in Nuenen is where Vincent lived with his parents.

The small town of Nuenen in the southern Netherlands is where Vincent van Gogh lived and worked from 1883-1885.

On 1 January 2000 I went there to see three sites that Vincent knew and painted.

Nuenen today is mostly middle class, with many residents commuting to the nearby city of Eindhoven. Boutiques and restaurants line its new shopping arcade. The town’s village green with duckpond is, apart from the addition of a bandstand, probably unchanged from Vincent’s time. 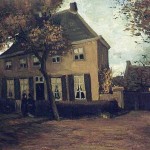 The Nuenen of Vincent’s day was a small agricultural village consisting of dreary, dark, tumbling thatched cottages, clinging to the soil. The community that Vincent portrays in his works is of poor, hard working, labourers with only an endless grind of toil and mud to look forward to. The Parsonage, at Berg 26, is where Vincent lived with his parents.

I am certain Vincent would still recognise every brick of this imposing and handsome building. I made this hasty sketch.

A small wooden notice beside the front door declares that this vanGoghhuis is not open to visitors. It isactually still the Parsonage. A small public right of way leads down to the left, of the house allowing nosy visitors the opportunity to study the back of the house, which Vincent recorded so beautifully in his sketches. The outhouse into which Vincent moved to give him more space away from his family still stands. A pile of logs and a rusting wheelbarrow leaned up against the old doorway. It was in here that he created his first great masterpiece ‘The Potato Eaters’. I sketched.

This little chapel, The Reformatischekerk, built in 1824, is where Vincent’s father preached. It is still surrounded by tall trees and sits opposite a delightful terrace of low stone cottages that Vincent would have known, though probably as thatched rather than pantiled, as today.

The notice outside the chapel said if you wanted to enter, “please get the keys from Berg 26”  the Parsonage. While I stood and sketched, my friend dashed back to the vanGoghhuis to get the key. But the pastor who answered the door unfortunately had a dying parishioner to attend to and couldn’t escort us today.

I made a quick sketch.

I wanted to find one of the watermills that Vincent painted, the Collsewatermoelen. Having no idea where to find it, I asked a waitress: “just beyond the industrial estate”, she said. My heart sank. However once passed the final metal and glass box of modern light industrial architecture, we were greeted to a sight almost completely unchanged from the 14th century.

Despite the cold I got the sketchbook out.