La Crau and Montmajour, the haunt of Vinent van Gogh

I wanted to go to the old ruined abbey at Montmajour, just 3kms from Arles, not for any pious reasons, obviously, and not because it’s a nice building. I wanted to go there because it was a favourite haunt of Vincent van Gogh when he lived here in 1888. I wanted to find a way to get up to the rocky outcrop on which it is built from where Vincent sketched this lovely drawing:

…Vincent puts in the drawing if you look carefully. I even rang the directeur of antiquities to try to get special permission to go beyond the gate, but she was away and my poor French prevented me from pressing my request harder with more junior staff. Gah! 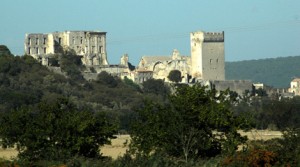 It was so frustrating, knowing that view is still there, unchanged. Next time, perhaps, next time.

I love this drawing for lots of reasons, but I like to think that Vincent relegated the abbey to its rightful place behind the rocks, and put nature – which here in Provence intoxicated him more than ever before – in front. Way to go, lad!

From down on the plain of La Crau, I did manage to make a very quick sketch of the abbey:

Instead I would have to make do with big views of the plain of La Crau, from up here by the abbey, which Vincent loved to draw and paint, looking over the farmland and canals, towards the little ridge of land near Pont de Crau where we were staying, and back towards Arles:

No wonder he loved it up here so much! The views are fabulous.

I hastily got my pencils out to make a rough sketch; painting was out of the question as the mistral up here was so strong I could hardly hold my sketchbook open.

It was somewhere round here he painted the simply wonderful ‘Harvest landscape’.

We drove out onto some tiny dead-end farmtracks into the plain of La Crau to try to find a viewpoint with both the abbey and the Mont de Cordes in, like Vincent shows us, but I couldn’t find it, couldn’t get the angle right.

Then after almost two weeks of looking, the penny finally dropped: his viewpoint for ‘Harvest landscape’ was almost certainly from somewhere by the canal which runs parallel to Arles’ eastern ring road. Here’s a shot of it taken from our car as we drove past. It wasn’t possible to stop:

Only from there, on the raised banks of the canal would he have got the height he needed. Then having found his view, he placed the elements he wanted to show into a satisfying composition based on the reality in front of him, rather than a slavish, topographically accurate representation of what he saw in front of his eyes. Now I understand. Now I really see.

Vincent's cafe terrace then and now