Reasons to be cheerful

One, two, three: it's The Blockheads.

Reasons to be cheerful

Ian Dury and Blockheads had a string of memorable hits in the late 70s. Remember ‘Sex and Drugs and Rock & Roll’, ‘What a waste’, ‘Hit me with your rhythm stick’ and ‘Reasons to be cheerful’? Of course you do, I loved them. Although Ian Dury died in 2000, the The Blockheads go on, playing the distinctive and catchy songs, written mostly by Ian Dury and Chaz Jankel. We went to see them play at Cox’s Yard in Stratford-on-Avon last night (November 2006).

“Good evening. We’re The Blockheads and we go like this”

They started straight into the hypnotic groove of ‘Hit me with your rhythm stick’. And they were thumpingly good from the very first note. If a positive mental attitude is the key to healing and good health then The Blockheads should be available on the NHS. I couldn’t stop smiling and shakin’ my ass.

Seven band members crowded onto Cox’s Yard’s tiny stage. They were all marvellous musicians, but I want to single out just a few for comment. We loved the spectacular drumming of Dylan Howe whose rhythms fused effortlessly with the riffs of rubber-fingered bassist Norman Watt-Roy. Together their skipping and jumping riffs kept the whole thing feeling profoundly funky. Derek The Draw sang both lead and accompaniments, and dotted the ‘i’s and crossed the ‘t’s with detailed and varied percussion, as well as standing there as if a real character from one of the songs.

Ah! Those songs! Most have grooves, melodies and hypnotic riffs combining funk, jazz, rock and reggae. At times they border (dangerously, in my view) on EastEnd pub singalong, but at their heart is something quite special: poetry.

The lyrics describe and comment on the lives of ordinary working class people from around London and the south east of England with poignancy, wit and respect. Listen out for ‘My Old Man’, ‘Billericay Dickie’ and (knock me down wiv a fevva) ‘Clevor Trever’.This is real English folk music.

Unfortunately, last night they didn’t play ‘Wake up and make love with me’ which is both my and Moth’s favourite Blockheads song. But you can’t have everything, and at least they played the classic ‘Sex & Drugs & Rock & Roll’ which as the lyrics themselves say is ‘very good indeed’. 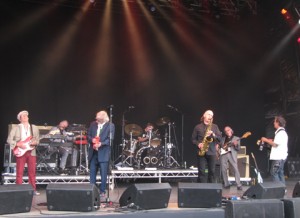 Ian Dury may have been dead for six years, but the show – and his legacy – goes on.

Velazquez at the National Gallery