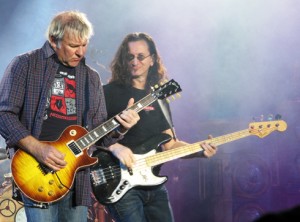 We were fortunate to see them again last night at the NEC in Birmingham, this time from the third row from the front.  This allowed my husband to indulge his passion for photographing the bands he loves.

That they have sustained a truly successful career spanning more than 40 years and brought their fans with them during all that time is testament to their abilities as accomplished musicians and songwriters and their urge to keep trying new things. Here’s Alex going for it:

The theme of the show (they always have a theme) was Time Machine and, apropos of nothing, sausage making. 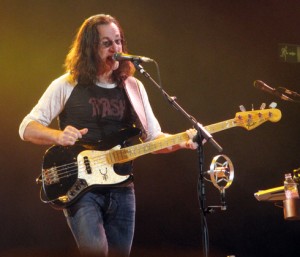 After a short and very amusing film on the giant screen behind the band, they opened the show with Spirit of Radio, a well-known example of Rush’s genre: slick, heavy, precise, tuneful inventive progressive rock, played to perfection.

For Rush fans, among the songs they played were; Far cry, Free will, Faithless, La Villa Strangiato, the first two parts of 2112, Stick it out, Presto, Working them angels, Leave that thing alone, Marathon, Subdivisions, and new songs BU2B and Caravan. For the start of the second half they played their wonderful 1981 album Moving Pictures in its entirety in track order. 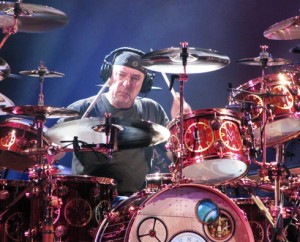 Neil displayed his drumming skills in a 10 minute drum solo – more of a song played only on drums really – and proved yet again why he is so often cited as possibly the best rock drummer in the world.

I am unfeasibly fond of Neil.

Rush like to keep their fans amused not only with their music, but also with an impressive light show, back projection of films, periodic flames (which felt damned hot from where we were at the front), fireworks and carefully timed explosions.

You get to know the characters in a band if you follow them for a few years. Though (sadly) I don’t know them personally, Alex, Neil and Geddy are lovely people; modest, intelligent, humane, witty, warm, hard-working. And they make fab music. Thank you chaps for rocking my little world.