John Martyn on stage, just months before his death 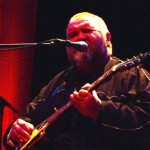 I find it difficult to write objectively about the music of John Martyn because his songs are so powerful it is as if he wrote them deliberately to reduce me to a quivering jelly.

And so it was inevitable that I would at some point find myself with big tears rolling down my cheeks at last night’s gig at Birmingham’s Symphony Hall. Unlike when we last saw him play at Fairport’s 2006 Cropredy Convention, when we were half a field away, this time we had front row seats so I was able to see his face, watch his expressions, see the twinkle in his eyes and see his fingers dance lightly over the strings of his various guitars. As he arrived on stage in his wheelchair, the warmth, respect and love for this man from the audience became clear. A very high percentage of people in the audience will have either fallen in love, lost a love, wept along with, or made love to this man’s songs.

His vocal style is a weird mixture of growls and slurs, sweet high notes and burblings, and with it he conveys the very deepest of feelings. Although he may have been singing some of these songs now for more than 30 years, he still imbues all the emotion as if he wrote them yesterday. They are very human songs – describing many different kinds of love, and loss, hope and joy. He and his wonderful band hardly seemed to play the songs; rather they exuded them as naturally and simply as breathing or thinking.

This gig, part of the Solid Air anniversary tour, featured him playing songs from the 1973 album of the same name.