Speaking at the Charlbury Beer Festival

Speaking at the Charlbury Beer Festival

Jane astonishes herself by speaking in public!

Last weekend Jane appeared as a guest speaker at the wonderful Charlbury Beer Festival in their Culture Club tent, as part of ‘a programme of mind-expanding talks’. Her subject was ‘Maps, Shakespeare and me’ to coincide with the 400th anniversary of Shakespeare’s death, and the completion of her maps and paintings of Shakespeare.

At first Jane wasn’t sure about doing it, as she thinks she’s  “…not much of public-speaker – I get very nervous and dry-up” she says. To help overcome this she did an ‘in conversation’ interview with Nick Millea of Oxford’s Bodleian Library’s map department. And it worked a treat!

An appreciative audience responded very warmly to Jane’s maps, and “even laughed at some of my jokes”. Listeners included a number of real live cartographers and map librarians, including a gentleman from the British Library, so she was in esteemed company.

We took along six original paintings to show. And through them, Jane told the story of how she got into painting maps, starting in 2010 with a pen and ink map of Eynsham, the village where we live, and how she moved on from hand-drawn maps to full-colour painted maps like her Map of Oxfordshire, which won a commendation from the British Cartographic Society in 2015.

“Proper cartographers make maps on the computer these days!” says Jane, “They can move layers of work around, experiment with typography or re-position stuff as they work. But painting in watercolour is a riskier business. Once the paint is down it’s there for ever. I can’t change my mind. I have to be bold and sometimes that’s quite scary. I’m not a trained cartographer, I make things up as I go along, follow my instincts. I go where the painting takes me.”

Jane discussed not only the subject matter of her painted maps, but also the process of how she goes about making a map; how long it takes, the underlying pencil scribblings, the hours of research, and the gnashing of teeth… before she can allow herself to even begin applying ink or paint, which is the bit she really wants to do! This restraint and attention to detail is all the more impressive if you remember she makes practically all her works for her own amusement in her (so-called) ‘spare time’. 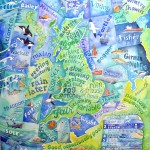 Nick also asked Jane about her painting of the shipping forecast, Attention All Shipping (pictured left), which we had taken along and was universally popular with the audience. There are so many stories to tell about this painting, which Jane thinks is the best thing she’s ever done! Jane explained where the idea came from, how she planned it, which bits she painted first and why, choosing all the different typography, how long it took to paint (about 100 hours), and all the different kinds of ships and marine creatures that appear on it. She told the story of Captain FitzRoy, the ‘inventor’ of weather forecasting, after who the sea area known as Finisterre was renamed in 2002. There’s a tale behind every part of it!

Just one amusing example of these tales is that when we were holiday in the Isles of Scilly in June 2016, Jane was almost obsessed with finding ‘Scilly Automatic’ coastal weather station, named in the shipping forecast. But there’s more on that story to come when I blog our visit to the Isles of Scilly….

Despite her misgivings on whether she could interest an audience for 45 minutes, the time flew and Jane was delighted that the audience seemed to have found it so interesting and entertaining. She even managed to enjoy it herself! So much so, that when doing it again in the future was mentioned while talking to the organisers, she admitted that she’d be delighted to….

Many thanks from both of us to the lovely Ed, Nick and their team for their help and kindness, and to everyone involved in the festival.

Paintings from the riverbank – as lockdown eased

The Arrival of Spring on Pigeon House Lane