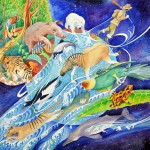 Side 1 track 3 of Genesis’ 1977 album Trick of the Tail tells the tale of the squonk, a mythical creature from American folklore. Listen here and read the lyrics.

Legend has it that the creature is so ashamed of its hideous appearance, it hides deep in the forest and spends much of its time weeping. Hunters report that when captured, squonks dissolve into a pool of tears. It’s a beautiful, powerful, haunting song. Whenever I hear it, I wonder if the story of the squonk isn’t a metaphor for the age of catastrophic extinctions we live in, and the hand of humankind in the biological disaster that sweeps the world almost unnoticed?

There have always been extinctions; 98% of the species that have ever lived are now gone. But there is no doubt that the current biodiversity crisis is not due to natural selection, but by unnatural human interaction: careless farming, plunder and disrespect for the oceans to say nothing of hunting, habitat loss and human overpopulation.

I have wanted to make a squonk painting for years but had trouble working it out in my head. I thought I just better get on with it. The painting shows various species being swept off the planet by a tsunami of squonk’s tears. 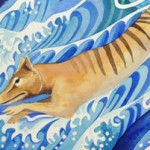 The thylacine (Thylacinus cynocephalus) is an extinct Australian marsupial wolf, last seen in 1930 in Tasmania. It was persecuted by Australian settlers as it liked to eat sheep. 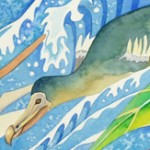 The dodo (Raphus cucullatus) was the first species to be ‘noticed’ as extinct at the hand of man. Endemic to Mauritius the flightless birds were easy meat for passing sailors. It was last seen in 1662. I wonder what its song sounded like? It was never recorded. 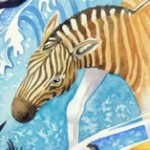 The last quagga (Equus quagga quagga), a southern subspecies of plains zebra, was seen at Amsterdam zoo in 1883. It was hunted to extinction. An ambitious and unusual project to revive the species is underway in South Africa. 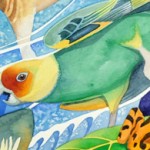 The Carolina parakeet (Conuropsis carolinensis) was the only indigenous parrot native to the east, midwest and plains of the US. The last seen in captivity in 1918 it was declared extinct in 1939 a victim of deforestion and hunting. 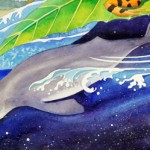 The baiji (Lipotes vexillifer) was a river dolphin inhabiting the Yangtze. It was declared functionally extinct in 2002. In 2007 there was a sighting of one, but to all intents and purposes, it has gone;  lost to industrialisation of the river, pollution, electro-fishing and entanglement. 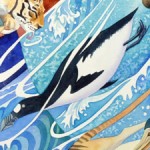 The great auk (Pinguinus impennis) was once a common sight in the North Atlantic, and was the northern equivalent of the penguin. The last one was killed in 1844. I wrote a blog about the great auk here.

I included in my painting a number of species that are in danger of being swept off the face of the planet by the tidal wave of extinctions. 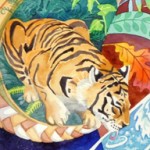 The tiger (Panthera tigris) is the largest of the felidae family. It once had a huge range across Asia. Hunting, habitat loss and the ludicrous trade in tiger body parts for so-called Chinese medicine (ineffective superstitious quackery) means the cat is now doomed. Three of the nine subspecies are already lost. In 50 years, perhaps fewer, it will be gone if significant and meaningful action isn’t taken now. Genetically it may already be too late. 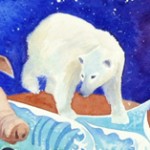 Polar bears (Ursus maritimus) are the largest land based carnivore. Unreliable cycles of Arctic sea-ice means seals – on which the bears feed – have fewer places to pup. At the top of the food web, toxins from pollutants concentrate in their bodies. Things can only get worse for polar bears if greedy humans start to exploit the Arctic oil and gas reserves. It’s looking really grim for the ice bear. 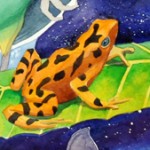 The Panamanian golden frog (Atelopus zeteki) is actually a toad, endemic to the cloud forests of western Panama. Highly toxic and with a fascinating lifecycle, this gorgeous little amphibian is threatened with extinction by fungal disease, habitat loss, agricultural encroachment, pollution, pet trade and aquaculture. Significant effort is being made to save the species, with specimens collected for breeding in captivity.

Maui’s dolphin (Cephalorhynchus hectori maui) is a tiny, exquisitely beautiful dolphin, a subspecies of Hector’s, endemic to the west coast of NZ’s North Island. They are gravely threatened by toxoplasmosis and entanglement in fishing nets. In 2012, a survey estimated only 55 individuals left. A recent conference of marine biologists in New Zealand concluded that it may already be too late to save them.

The elegant and graceful Okapi (Okapia johnstoni) is a forest-dwelling giraffid native to politically unstable central Africa. It is threatened by poaching and human disturbance.

Human beings are inextricably linked with all other species – we are all in this together. All life is a delicately balanced web: remove one strand of it suddenly and there are unpredictable consequences for everything else. Our own survival depends on there being a biodiverse planet. I care about biodiversity more than almost anything else and I found this painting quite depressing to research and paint, as most people don’t seem to know what’s going on and even if they do, they don’t care enough to do anything about it. Find out more.

For a fascinating read I strongly recommend David Quammen’s The Song of the Dodo.  One of the best books I’ve ever read, it’s up there with Shakespeare’s King Lear and Harper Lee’s To Kill a Mockingbird. I kid you not.

A digital file of this painting is available here for you to print at a format and size of your choice for £35.  Read more about buying a digital file for self-printing…

Birding in The Gambia

The self-immolation of Mohamed Bouazizi - 17 December 2010