I never thought I would ever see Steely Dan play live, but I was wrong! 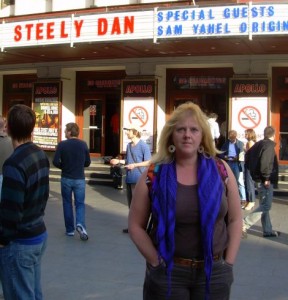 I don’t remember exactly when I first heard a Steely Dan record, but I guess it might have been ‘Reelin’ In The Years’ in the early 70s. I was just a child at the time, so didn’t know why I liked Steely Dan so much, I just knew I did.

I knew nothing about the band, though I remember discovering they were American when we went to live in California in 1977. ‘Peg’ was a massive hit and played almost constantly on the radio. Now, every time I hear that song I am a teenager again at high school in California.

And now I know why I think they’re so wonderful; it’s the huge catchy tunes, the twiddly riffs, the jazzy rockiness, the crazy lyrics and the sheer complexity that appeals. A couple of years ago, I discovered British Steely Dan tribute band Nearly Dan,but I didn’t think I’d ever see the real Steely Dan. I was wrong.

My husband Moth (who wooed me by presenting me with the entire Steely Dan back catalogue and put up with me playing ‘Aja’ over and over and over again) took me to see Steely Dan at Hammersmith Apollo on Saturday night, one of only three dates in the UK; they rarely tour anymore. The gig sold out in an hour but Moth still managed to get us front row seats.

I’d waited more than 35 years for this, so there are no superlatives to describe how it felt to actually see Walter Becker and Donald Fagen play and sing the songs that have formed the soundtrack to my life.

Postcard from Arles: a walk in Vincent van Gogh's footsteps