A spellbinding performance from this most troubled of American singer-songwriters 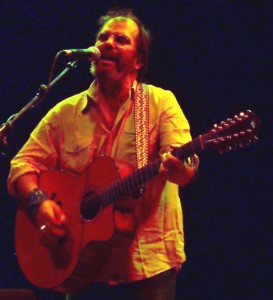 Basingstoke holds nothing but unhappy memories for me, but last night at Basingstoke’s Anvil Theatre, those ghosts were blown away by Steve Earle who we saw sing and play.

From our front row seats we were treated to a spellbinding performance from this most troubled of American singer-songwriters. His turbulent life of seven marriages, a stay in prison for drugs and gun crime, and an almost fatal battle with heroin addiction means he can sing the blues and mean every single word.

He is often labelled as a ‘country’ artist. But, to my mind, he is far more blues and rock with only a twang of country. Well, however you want to label him, the bare facts are he is a man with a guitar, a harmonica and some profound songs to sing about what it is to be human.

If you haven’t of him, then it’s because he’s not mainstream. You won’t hear him on the radio. But you may well have heard something by Steve Earle, because his songs have been widely used in films. He sings about work and poverty, racism, the travelling life, family and lost loves. You come away from a Steve Earle gig with a greater compassion for people; what it is to face injustice, what it is to love and be loved.

I was first exposed to Steve Earle by my lovely friend Simon Stafford (thank you, Simon) whose band, Cooper Black does covers of some of his songs. Before last night I wouldn’t have called myself a huge Steve Earle fan but I was delighted to discover I knew most of the songs he played.

He began with just a guitar and harmonica and wove a magical spell over the audience going straight from one song to the next without interruption for perhaps ten songs. As the gig progressed, he was joined on stage by his wife Allison Moorer. I’m generally not a fan of female singer-songwriters, and especially those with a country bias (the sort of cack Bob Harris plays) so I wasn’t looking forward to this bit. But I was genuinely delighted with their collaborative work, which was both ballsy and sensitive without being sentimental.

He was also joined on stage by Neil MacDonald, who I was automatically predisposed to like due to his wearing an Allman Brothers Eat a peach T-shirt. Robert played recorded samples and beats from turntables to which Steve sang and played along. It added further depth and power to the songs.
His set included: ‘Galway Girl’, ‘Sparkle and Shine’, a perfect love song, ‘Billy Austin’ – about the death penalty, ‘South Nashville Blues’, ‘Goodbye’, ‘Devil’s Right Hand’ –  an anthemic anti-gun song, ‘Jericho Road’ – great rock ‘n’ roll, ‘Down here below’- a view of New York as seen by a red-tailed hawk soaring over the city, ‘City of Immigrants’ about immigration and racism, ‘Steve’s hammer’, ‘Little Rock and Roller’ – about his son, ‘Tennessee Blues’, ‘Satellite radio’ – a great sing-a-long, ‘Jerusalem’ – about peace in the middle east – and finished with the mighty ‘Copperhead Road’.

To say he was warmly received is a gross understatement.

For universal human morality, I don’t look to Jesus or Mohammed. In my search for truth and beauty I turn to the works of great writers like Shakespeare, and from modern poets like Roy Harper, Bob Dylan, Mike Scott and Steve Earle. Stay clean and rock on, sir!