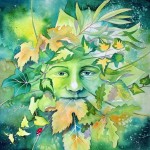 If I say ‘green man’ there’s a damned good chance you’ll think of a pub or an alien from Mars. But think again for a minute. Think of a woodland spirit and remember what was painted on that pub sign…

In Europe, the leafy face of the Green Man appears carved as a gargoyle on and in churches and in ancient documents. He may be a pagan deity from as far back as neolithic times, subsumed into subsequent religions across the globe, as so many ancient rites and traditions always have been. But wherever he appears, he is a leafy, strong, fertile, playful, woodland or forest-dwelling deity and appears to satisfy a universal human need.

The character of John Barleycorn, Jack-in-the-green, Robin Goodfellow and Puck may all come from the same now-lost spirit who only exists as faint whiff in our collective folk memory.

I love the idea that a deity who may have been created, worshipped and feared by the same people that built, for example Silbury Hill and walked the Ridgeway still has a relevance in our lives. He sometimes turns up in my paintings.

Velazquez at the National Gallery