An exhibition of van Goghs at Compton Verney

Yesterday we went to an exhibition of paintings by Vincent van Gogh at Compton Verney in Warwickshire.

Weirdly for me, this exhibition takes place in a stately home which I passed every day on my commute to and from school in nearby Kineton from 1974 to 1982. It was at my old school as a 16-year-old, I was first exposed to van Gogh and seriously started to study him. When I passed it, Compton Verney was a derelict old pile, used very occasionally as a film set, but mostly abandoned. In the 1990s it was given a major face-lift and is now a glorious exhibition space in the heart of leafy Warwickshire. Mounting this exhibition of Vincent’s work will give it much good press as a serious art space.

More than 23 of Vincent’s works are on show, a good number of them I had already seen, but as Vincent’s output was so massive, there are always surprises in store. Among the old favourites was Wheat Field with Cypresses, (below) normally seen in London’s National Gallery which was the second real van Gogh I ever saw, the London Sunflowers being the first.

But my first surprise was not a picture by Vincent at all. It is a tiny sketch of Vincent talking to a man who is possibly (I think probably) his brother Theo made by Lucien Pissarro in 1887. Vincent is on the left.

The sketch lives at the Ashmolean in Oxford, but I’d never seen it as it is never on display, due to its fragility. I had no choice but to sit and copy it! 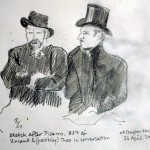 As I drew I was impressed with the speed with which the young Lucien must have made the sketch. There’s no mucking about here, just confident pencil strokes and a beautiful sensitivity of line. The more I looked the more I could feel Vincent’s argumentative, grumpy beligerance (arms folded, slight scowl) and Theo’s admiration of his brother. And doesn’t Theo look dapper, in his tall, shiny top hat and big upward turned collar?

The exhibition’s theme is about the pioneering early British collectors of Vincent’s work, some of who were the artist’s friends, including Alexander Reid, a Scottish art dealer, living in Paris at the time when Vincent and Theo were there together. There are two portraits of Reid, including this one:

There’s also this ‘Portrait of a man’ whose identity is unknown:

I never thought I’d see this one because it now hangs in Melbourne. Moth and I considered the brilliance of this portrait: the expressive, lively brushstrokes, the outstanding draghtsmanship, the way Vincent just ‘sees it’, puts it down and leaves it. There is no overworking, no grappling with the paint, no fannying around. He probably did the whole thing in a couple of hours tops. Genius.

And there’s more genius. Look at this beastie!

‘Two crabs’ from 1889 blew me away. This is quite a large study of probably one crab flipped over half way through the painting process and seen from both sides. The emerald green and viridian background seems to throw the crabs right out of the picture and make them even more real. The anatomical observations are astonishing and Vincent’s joy in the beauty of a simple crab – its colour and shape and construction – sings out. This painting is privately owned and has only ever been exhibited twice before, so this was a very special treat indeed.

The more I look at Vincent’s work the more I witness his love of the the natural world. I spent some time admiring this drawing, for example.

Done in pencil and chalk with a bit of ink added, it’s faded a bit since Vincent made it in 1889 in the garden of the asylum at St Remy, but look at the glory of the pine trees, soaring up into the sky! The drawn marks almost look like handwriting, as if he were describing the scene in an unspoken, universal language. What a draughtsman! I have so much to learn from him.

I could wax lyrical about each picture I saw, but I’ll spare you, dear reader, and instead point you towards this webpage which features all the works on show in the Compton Verney exhibition. It was compiled by my friend David Brooks in Toronto, who runs the only complete online resource of all Vincent’s work, and is itself a masterpiece.

The exhibition runs until 18 June 2006 at Compton Verney, then it moves to Edinburgh.