What is folk art?

For and by 'the people', it's often the 'poor cousin' of fine art

The Art of Jane Tomlinson > About art > What is folk art?

What is folk art?

A few years someone described me as a folk artist.

I’m not talking about music here, I’m talking about visual folk art. I took it as a compliment – straightforward art for people to enjoy. So what is folk art? Generally it’s native decorative or utilitarian art from an indigenous culture. So in British terms, it’s the kind of stuff you see on pub signs, narrowboats, circus stalls, union banners, hand-stitched samplers and railway posters. There’s an honesty – sometimes naivity – about it that people understand and respond to. It’s about as far from Carl Andre’s infamous pile of bricks as you can get. 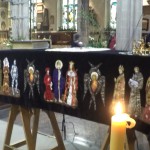 Anything can be folk art, and anyone can produce it

That shouldn’t make it fine art’s poor cousin, but often it does. It usually takes as much skill, patience, creativity, originality and vision to produce folk art as ‘fine art’ and more often than not is is imbued with as much meaning. But there is undoubtedly a blurry line between the two. 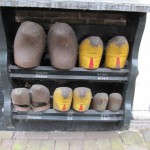 Last summer I painted a couple of clogs just for a bit of fun, inspired by a rack of gardening shoes I’d seen in the Netherlands. And then, last autumn, two recent exhibitions I attended confirmed my suspicions that I am probably a folky; a terrific show of quirky exhibits at Compton Verney alongside their marvellous permanent collection of folky treaures. And Grayson Perry’s ‘Who are you?’ exhibition at the National Portrait Gallery. Grayson Perry’s is undoubtedly a fine artist, he’s won the Turner Prize after all, but his work proudly takes in the  traditions of folk art with astonishing, beautiful and meaningful results. 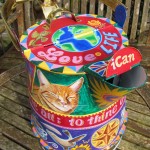 Feeling inspired, I decided to ‘out’ my inner folk artist and be more honest with myself. To that end, I have produced a self-portrait in the folk art tradition entirely for my own pleasure. It’s my iCan. I hope you like it as much I liked painting it.

Read more about my iCan and see more pics.