A painting of a single zebra in four poses tracking the rhythm of its legs as it canters. 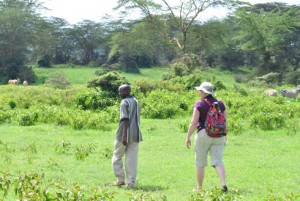 We were at Crater Lake game reserve near Naivasha, Kenya,in March 2010, a place where, with a guide, you can walk in the bush. We got up quite close to giraffe, eland, kongoni and lots of zebras.

Moth took a sequence of photos of a zebra cantering past us. Moth’s very good at panning – swinging the camera round to follow moving objects – and shot a sequence of pin-sharp photos of this stripey equine.

I’ve always been intrigued by the work of 19th century photographer Eadweard Muybridge and his impact on the way we ‘see’ movement, you’ll probably know about his sequence of stills of racehorses which he put together like this:

Anyway, doing a similar thing,  I selected four shots from Moth’s sequence, put the figures together to make a painting. 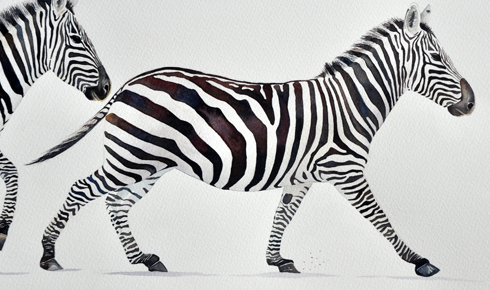 Each zebra’s stripe pattern is unique, so in painting four figures of the same animal, accuracy in painting each stripe was paramount. I wanted to get that visual shimmer you get with all those fast moving stripes; the stripes that define the zebra’s gorgeous anatomy.

Here’s a detail of the second figure:

The natural elasticity of tendons in the hoof and ankle, which gives the zebra such snappy bounce and speed, intrigued me more and more as I observed each of Moth’s photos more closely.

Having painted such a keenly observed  figure of one single equine, I can now better appreciate the genius of 18th century English artist George Stubbs, who didn’t have the benefit of Moth’s photographs – or indeed anyone’s – to work from!

We and Jimmy Page spellbound by Roy Harper