A picture of Pop Art 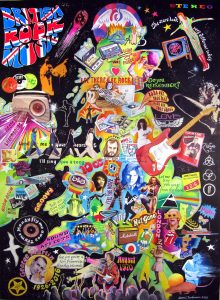 My life has always been accompanied by music, much of it British, much of it rock. So what could be more natural to a British music-loving artist who has been having fun painting maps than a British Rock Music painting?

2017 marks the 50th anniversary of the release of the Beatles’ groundbreaking album Sgt Pepper’s Lonely Hearts Club Band, the cover of which was painted by genius British pop artist Peter Blake.  As the idea gelled in my head (in a matter of seconds) it was clear to me that my map would be created in a Pop Art style, as a loving homage to Peter Blake and the vibrantly original British music industry.

As well as encouraging me to use spectacular typography and colours, the Pop Art influence prompted me to experiment with homemade transfers and collage. With the transfers (or decals) you’ll notice a few things I couldn’t possibly have painted with such detail. And collage allowed me to have tiny bits of a road map of Britain peeping through in places, too.

I knew it needed to be more than just a bunch of portraits of bands and artists, it would have to tell a story – a story that other music fans would dig. So yes, a lot of my favourite artists are illustrated, but I’ve also used all other ways to represent influential music including album covers, lyrics, some history, and other universal icons.

British rock music is a rich, colourful kaleidoscope of originality – I hope some of your favourites are shown! 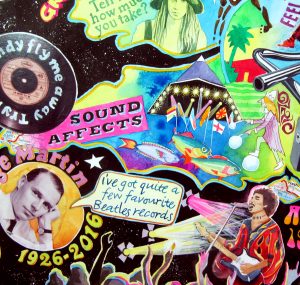 There is often a reason why our favourite music became a favourite – an emotional tie to people, places and times. That’s certainly the case for me. I can’t possibly tell many of those stories here, but here’s just one to give you a flavour.

I’m Mandy Fly Me by 10cc features prominently in the bottom left. I’ve loved 10cc since the early 70s, and in 1976 my brother gave me the single of this song for my 13th birthday. This song really connected with me! He gave me the single when we were on holiday in the Isles of Scilly, and I remember the happy family time we had in that beautiful place whenever I hear it. (I still love the Scillies too, and visited again in 2016! You can read about our visit in Moth’s blog, right here)!

What’s on the map? 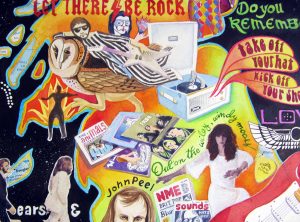 I love a wide range of music – classic rock, soul, funk and blues, as well as some pop, disco, punk and reggae, so we’re talking ‘rock music’ in a fairly wide sense. Most of these ‘genres’ are reflected somewhere in the painting. No classical though, much as I love it… but I did recently paint a map of British Composers as a commission!

Deciding what went in and what didn’t was difficult, but fun! There are universal elements of the British rock music story including Marshall amplifiers and a Dansette record player, as well as some famous British record labels, Bert Weedon‘s ‘Play in a Day’ and Radio Caroline.

There will be things that you think I have missed, but of course I couldn’t fit everything in. Ultimately it’s my painting, my personal visual soundtrack. I couldn’t fit all my own favourites on, let alone everybody else’s!

For example, you might see Jeff Beck (bottom right) and think “Where’s Eric Clapton?” The truth is, EC’s music has never touched me, whereas Jeff’s has.

As often as I could, I placed subjects somewhere relevant (yes, I know Rod Stewart‘s not actually Scottish, but has anyone told him that?). And so much happened in London! I’ve allowed plenty of artistic license (and downright random placing!) to shoehorn in as many things as I could.

Get a signed copy of my British Rock Music map

‘Track details’ from top left of the painting:

Track 1, left to right (below) – 60s/70s-style logo title (based on the typography of ‘Rubber Soul’ by The Beatles), Deep Purple (Fireball album), Queen (A Night at the Opera), Rod Stewart (Maggie May) & cassette tapes, Average White Band (AWB album), BBC TV’s Top of the Pops, David Bowie (as Ziggy Stardust) and a classic ‘stereo’ logo.

Track 2 (below) – classic British record labels (Virgin, Stiff & Harvest), Black Sabbath (Vol 4 album), Ac/Dc (Let There be Rock – Angus, Malcolm & George Young and Bonn Scott were all born in Scotland, but of course emigrated to Australia as children),  Simple Minds (heart logo from Live in the City of Light), Marillion (Script for a Jester’s Tear & Kayleigh lyric – and yes, I know only Fish is Scottish & he left years ago!), and the ‘S’ from ‘Supertramp’ on the Crime of the Century album cover (subtle, that one!)

Track 5 (below) – Douglas DC3 Dakota flying classic blues albums in (for The Stones, Eric Clapton et al!), 10cc logo, Electric Light Orchestra/ELO (Out of the Blue), Joan Armatrading, Primal Scream (Screamadelica), Noddy Holder of Slade Feelin’ the Noize, Nick Drake with ‘Time Has Told Me’ lyric, Ian Anderson of Jethro Tull with ‘Songs from the Wood’ lyric , and an adaptation of the cover of ‘Never Mind the Bollocks’ by the Sex Pistols (plus more Led Zeppelin symbols, obviously!).

Get a copy of my British Rock Music map