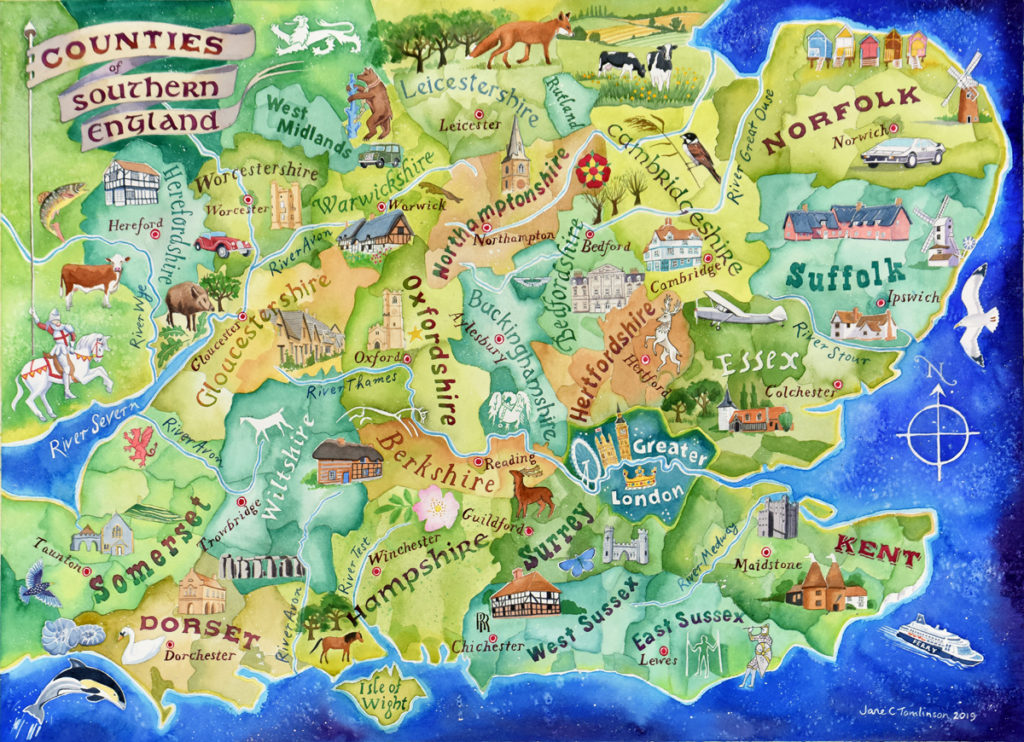 My painting the Counties of southern England was commissioned by a customer who works in land and planning. He wanted a map of Oxfordshire and the surrounding counties showing each county’s administrative council districts, as well as rivers, county towns, and any thing else that, as he says: “takes it into a more artistic and interesting direction, in which case happy just to see the Counties in South England in your lovely style.”

That’s quite a lot to fit onto a sheet of A1! The organic shapes of each county, and the wandering lines of the main rivers which is some cases form the boundary between counties and districts, are at the heart of the painting.
I suggested to my customer it would be nice to include some of the vernacular architectural styles of each region, of which the UK is so richly endowed. He agreed. My customer is also very keen on cars, so you will also spot a few of his favourites! And because it’s a painting by me, there are inevitably a few trees, birds, and animals.
Each county’s administrative districts are shown with subtle variations of tone. On a painting the size of A1, hand lettering all those district council names would have been impossible and left no room for anything else, so only county names, county towns and river names are shown.

In alphabetical order, here’s what’s shown in each county:

Berkshire
A red deer stag from the county flag stands in Surrey, with his head in Berkshire.

Bedfordshire
Part of the facade of Woburn Abbey, the ancestral seat of the Dukes of Bedford.

Buckinghamshire
The county swan emblem has been used to represent the county since Anglo-Saxon times, when the county was known for breeding swans for the king.

Cambridgeshire
Rather than illustrate university buildings, I have chosen to show something more ordinary, but no less beautiful to my eyes – the corner of Northampton Street in Cambridge – a lovely example of the town’s vernacular architecture. Also there’s a reed bunting.

Dorset
Dorset has many charming small market towns, and I have chosen the lovely 18th century Market Building in Martock. And of course Dorset is famous for its fossils on the Jurassic coast.

There’s King Harold from the Bayeux tapestry having been shot in the eye with an arrow. Harold was the last Anglo-Saxon king of England.

Essex
As a child, my customer who commissioned this painting, used to fly out of Duxford airfield in Cambridgeshire in his father’s Auster aircraft.  Here they are soaring through Essex skies.

Greensted Church near Chipping Ongar is the oldest wooden church in the world, dating from about the 1oth century.

Gloucestershire
In the west of the county the Forest of Dean is illustrated with a wild boar among oak trees.

Arlington Row in Bibury is an outstanding example of domestic Cotwold architecture.

Hampshire
New Forest pony and trees. The rose is an emblem of Hampshire.

Herefordshire
Timber framed buildings are typical Herefordshire. The one I have illustrated is inWeobley. Also a fine red Hereford cow.

Leicestershire
The fox is the symbol of Leicestershire. In the north of the county is the National Forest, which spreads into Derbyshire and Staffordshire

Northamptonshire
A red rose from the county coat of arms, and a distinctive broach spire church, typical of this area. This one is at Broughton.

Oxfordshire
Eynsham church just west of Oxford has a beautiful crenellated tower typical of Oxfordshire, and a gorgeous porch.

In the south of the county is the Uffington White Horse, a massive bronze age figure cut into the chalky hillside.

Somerset
The small town of Somerton has a very distinctive market place with a lovely octagonal Buttercross. Over in the west, among the reedbeds of the Somerset levels 1000s of starlings gather in the reeds, a low lying region of the county. Glastonbury Tor is also shown, as is a red dragon which is an emblem of the county – the Welsh do not have a monopoly on such creatures!

Suffolk
It was the dyers of the county back in the 14th century who first mixed natural juices (sloe and blackthorn) or red ochre to limewash to produce the Suffolk Pink houses which are so distinctive.

On the coast is Saxtead Green post mill. There has been a windmill recorded here since the 13th century.

Surrey
A Holly Blue butterfly such as can be seen on the county’s chalk downs. Also illustrated, the mock medieval gateway built over the ruins of the original Reigate castle, complete with turrets and crenellations.

To the south of Norwich, a Lotus car is shown – one of my client’s favourites.

At the village of Horsey, this windpump has been used not for milling but for pumping water.

Rutland – alas, too small to illustrate anything at this scale, other than it’s name.

Hertfordshire
A White Hart from the county coat of arms.

Isle of Wight – alas, too small to illustrate anything at this scale, other than it’s name.

Warwickshire
The Bear and Ragged Staff from the county coat of arms.

Anne Hathaway’s cottage (the wife of William Shakespeare) – a superb example of a timber frame and red brick house under thatch.

West Midlands
A classic Land Rover – the factory is at Solihull.

Kent
At the mouth of the Medway, the mighty fortress of Rochester Castle.

Quintessentially Kentish, an oast house with their lofty conical towers, used for drying hops which were traditionally grown in the county.

Wiltshire
In the north of Wiltshire, the Cherhill White Horse.

A thatched house with timber frame and brick and flint, this example is typical of the area. Such domestic buildings are found throughout Berkshire and Hampshire, too.

In the sout, the iconic trilithons of Stonehenge.

Over in the west of the county Morgan cars are still made by hand at the factory in Malvern.