The extinction of the Great Auk

The Great Auk (Pinguinus impennis) was once a common and magnificent sight in the sparkling waters of the North Atlantic. 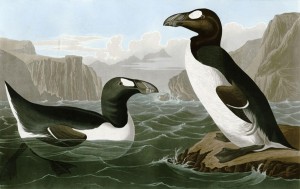 Great Auk by John James Audubon from The Birds of America

About 30 inches (80cm) tall and weighing in at a whopping 11lbs (5kgs), this handsome bird was the northern equivalent of the penguin. Its closest living relative is the razorbill which has a similar range to the Great Auk. The Welsh called the Great Auk ‘pen-gwyn’ which translates to ‘white head’. So when early Welsh sailors found similar looking creatures in the southern oceans, they used the same word to describe them, hence penguin.

Perfectly adapted for life in the oceans, they roosted at sea, they could stay underwater for 15 minutes, and dive and hunt to depths of at least 100 metres. Flightless and fish-hunting, to nest and raise their chicks the Great Auks needed isolated rocky places with a ready food source away from predators such as orcas, sea eagles and polar bears. Just like penguins they formed noisy, lively breeding colonies.

For most of their time on the Planet Three, they evolved away from human beings and never learned to be wary of them. This evolutionary naivety meant that when human populations expanded into auk territory and grew in numbers auks were hunted by locals as an easy meal. But there were fewer people back then and taking a few birds here and there made little overall difference.

But by the early 16th century the expansion of shipping in Atlantic waters meant it was easy for a ship to moor at an auk colony and take birds, chicks and eggs aboard to meet their fate on the plates of hungry sailors. It was the same for the dodo. Their demise was swifter as they only lived in one place, Mauritius, whereas the Great Auk had a wider range over the whole of the North Atlantic. In the end not even this would save them. During the 16th century Great Auks were being killed not only for meat and eggs, but also hunted commercially for their feathers.

In 1840, three men visiting a sea stack near St. Kilda off the coast of Scotland found a solitary Great Auk. But the when weather turned bad they blamed the bird for being a witch and therefore responsible for the storm, so they smashed the creature to death with a stick. They had just killed the last Great Auk in Britain.

Soon, word got out that Great Auk numbers had crashed and the bird had disappeared entirely from British waters. And here comes the appalling irony: this very fact lead collectors to seek the last few specimens, not to protect them or breed them, but to kill them and mount them for display in museums. A pox on those ignorant, savage bastards! 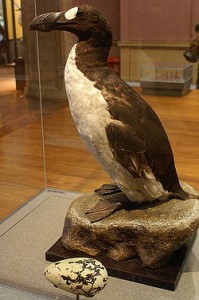 On 3 July 1844, Jón Brandsson, Sigurður Ísleifsson and Ketill Ketilsson found a solitary pair of Great Auks incubating an egg on Eldey in Iceland. They strangled the adults and smashed the egg. The last Great Auks on the planet were dead.

Each species the planet loses due to human activity is a disgraceful, pointless, sickening tragedy. Some might ask: what does it matter if we lose a few species? It matters a very great deal. Biologically speaking it’s actually a very small world and the global ecosystem is an intimately connected whole, making biodiversity crucial to our own survival. And so I weep at the loss of the Great Auk as deeply as I will mourn the inevitable loss of the penguins threatened with extinction in the southern oceans right now. Our thoughtless greed and over-population is on track to consign them, too, to the dusty glass case of the history.

A stuffed specimen of the gorgeous Great Auk can be seen at the Zoological Museum at Tring in Hertfordshire or at the Kelvingrove Museum, Glasgow.

Take a hankie and ask yourself: what kind of world will my grandchildren inherit?