A fisherman's map of British rivers

A fisherman’s map – a painting of British rivers 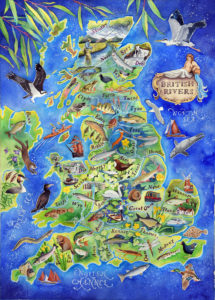 My painting of British Rivers is inspired by my son Rupe‘s obsession. He pulled his first roach out of the river Thames as a 3-year-old. Much like the roach, he was hooked! His fascination for fish and angling has only ever grown more powerful – into a deep love of natural sciences. He is currently a scholar on The EU International Masters in Marine Biological Resources.

My art is inspired by my passion for the natural world, with occasional forays in map-making. So, spurred on by my son’s deep commitment to all-things-fishy, it was inevitable that a hand-painted map of British Rivers would at some time fall from my brushes.

That time came in December 2018. But as my son was away studying, I turned to our chum Martin Salter on which fish species to illustrate where. Thanks Mart! The resulting painting took me 4 weeks from initial scribblings to finally cleaning my brushes.

British rivers aren’t only for fishermen!

Anglers may be surprised to learn this. There is a fundamental human need to be by them, on them, or in them. The number of small craft that ply up and down them, once for trade, now predominently for leisure, bears witness to the nation’s love for messing about on the river.

As Kenneth Grahame wrote in ‘The Wind in Willows’ – a magical book my generation and others was brought up with – “Believe me, my young friend, there is nothing — absolutely nothing — half so much worth doing as simply messing about in boats.” I have included many different types of boats in my painting.

You may be a kayaker, canoeist, punter, wild swimmer, picnicker, bird watcher, or rambler. This painting is for you too.

I grew up by the Warwickshire Avon in Stratford-upon-Avon, and now live close to the Thames (or Isis – as it’s called as it flows through Oxford) which is my son’s ‘home’ river.  Which is your home river? I hope I have included it.

A gift for my fisherman son

I had intended to sell both the original painting and prints of it. But that evening, after I had put it online, and I sat looking at the finished painting, I changed my mind. In the morning I would withdraw the original from sale, and instead give it to my son. That was the right thing to do. The following morning an email revealed that overnight someone had bought it! I had to tell them they couldn’t take the original after all. So disappointing to them, but luckily they understood.

My buyer will of course be getting a signed print. And you can get one too!