A visit to the Great Mosque in Damascus 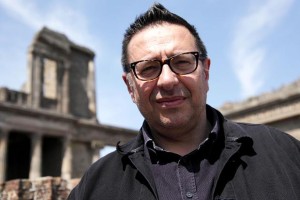 In an age of celebrity, where people are famous for just being famous rather than having any appreciable talent or skill, it’s no wonder that Waldemar Januszczak, pictured, isn’t a household name. But I love him. He’s a passionate art lover, art critic and writer. His presentation style is casual but informed, enthusiastic, evocative and humorous.

He bimbles about on our TV screens, doing for art what David Attenborough has done for the natural world.

Like me, Waldemar loves the arts, a well-written, thoroughly researched narrative, and travelling. What I like about him the most is his refusal to present art as elitist in any way. He makes it utterly accessible and understandable.

Last night we watched a two-hour programme by Waldemar called ‘Paradise Found’. which charts the history of Islamic art. Travelling from west Africa to the northern India, he showed us some of the gorgeous hidden treasures crafted in the name of Allah and explained clearly and simply how and why they came to be.

I’m lucky enough to have already visited some of Islam’s greatest treasures including the Taj in Agra, and the Great Mosque in Damascus and his programme has inspired me to see more; particularly Samarkand in Uzbekistan and Mali in west Africa. (The latter has been in my top ten on My List of Places to Go for years now.) 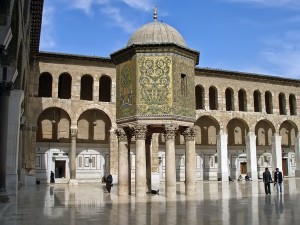 Moth and I visited the Great Umayyad mosque in Damascus a few weeks ago (September 2005). The Koran says women should ‘guard their modesty’, so in order for me to enter the holy place I had to cover up. Happy to adhere to local custom, I was already wearing an ankle length skirt, had my shoulders covered and planned to drape my head with a very long scarf. But this apparently wasn;t good enough.

I had to go to the ‘Putting on Special Clothes’ room to be properly dressed.

I came out wearing a garment suitable only for either night-time carp-stalking, or hazardous substance-handling. At first it was funny. But it wasn’t very long before I felt angry, sad, confused and humiliated.

And it wasn’t just that I was so hot I thought I’d faint. I felt de-humanised and not good enough. While the men in our party strolled around hatless in their below-the-knee trousers and short sleeved shirts, we women were covered from head to toe shielding ourselves from something. Hidden from what, exactly? Am I really that offensive? That’s what it felt like.

I struggled with my feelings. Why did I feel so humiliated? How did it feel to be a local woman and have to dress like this every day? Do they mind? Do women inflame men’s passions so easily that they have to cover up? If so, then why does the problem become a woman’s and not man’s? Do women deserve to be abused if they don’t dress modestly? And what is modest dressing exactly?

In my middle-class, secular, liberal, white western way I am drawn to two words. Choice and respect. If Muslim women choose to wear such clothes as a mark of their faith, I respect that. Why shouldn’t they? And of course, when I’m travelling I adhere to local customs by dressing appropriately. But allow me to feel human, at least.

Having to suffer the indignity of hiding myself away under cover-all clothing will not stop me from visiting other Islamic sacred places. And Waldemar has inspired me to seek out more.