The last resting place of the legendary singer-songwriter on Hiva Oa, French Polynesia

Jacques who? I knew nothing of Jacques Brel until I kept bumping into him during my research into the Marquesan island of Hiva Oa. 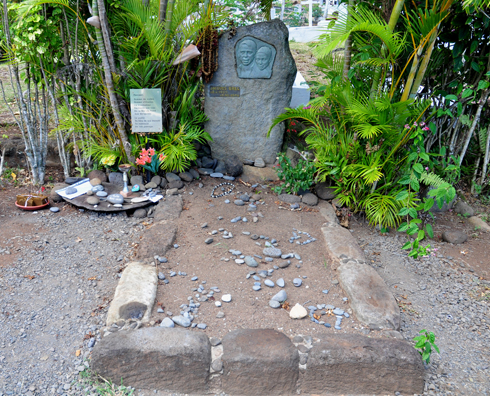 In the French-speaking world singer-songwriter Brel is as famous, as legendary and revered as perhaps Bob Dylan or Leonard Cohen is in the anglophone world. Such is his popularity he has sold 12 million albums in France and Belgium alone and 25 million worldwide. His most famous songs in the English-speaking world are “If you go away” and “Seasons in the sun”, a translation of the latter was covered by Terry Jacks in 1974 and by Westlife in 1999. His poetic lyrics reflect his radical views and are filled with metaphor and subtlety. They don’t translate well into English as far as I can hear, but are beautiful to read in French.

Brel came to Hiva Oa in 1975 on a round the world yacht trip.

He was immediately seduced by the beauty, serenity, simplicity and isolation of Hiva Oa. He died in 1977. He is buried at the cemetery in Atuona, very close to the grave of Paul Gauguin which we visited in February 2009. Hiva Oa is on the very edge of the world – remote and isolated in the middle of the Pacific – it took us 5 flights to get there.

As we sat at Gauguin’s grave, we watched a steady trickle of visitors made their way to Brel’s. One woman wiped a tear from her eye. A couple embraced in silence. An older man placed a flower. Many lingered. Most didn’t even bother to walk over to Gauguin’s grave, or they merely gave it a cursory glance. Brel is the attraction here.

In my dreadful schoolgirl-French I tried to explain to a French woman we met on a day trip how few people in the English-speaking world knew of Brel. She passed me her iPod on which she was listening to one of Brel’s final compositions, “Les Marquises”, a love song to the islands he made his final home. Without even knowing what the lyrics meant and without even much liking the croony chanson style, I could hear the depth of his love for this extraordinary, remote place.

Tikis at the edge of the world