Botanist, virologist, saviour of the British watercress industry, and my father

My father, who died on Tuesday 12 June 2012, was born into a working class family in Birmingham in 1927. What he lacked materially in early life was made up for in brains, courage and determination.

He was the son of Ellen Mary Mackie, from Worcester, and Harry Arthur Tomlinson, from Birmingham. It was Harry who introduced my father to the delights of the natural world. Harry was a WW1 veteran who survived Gallipoli, and during WW2 he worked as a volunteer fireman putting out the fires during the incendary bombing of Birmingham in early WW2.

John’s father had ambitions for his son to attend university, but he died in 1943 when John was only 15, while a pupil at Saltley Grammar School. John had dreamed of becoming a medical doctor but this now seemed impossible as the family had to manage on a widow’s pension. With the help of his local church, small charity bursaries for sons of widows, and by working in various city factories during school holidays, he scraped together enough for a place at the University of Birmingham. He began there in 1944, aged only 17, and studied biology, the first member of our family to go to university. He loved zoology – especially entomology and anatomy but he became fascinated with botany.

He realised that in fighting plant diseases, fungal and viral, he could contribute to improvements in global food production and make a difference to whole populations.

His first job was at Rothamsted agricultural research station in Hertfordshire. There, he learned the methodical, painstaking skills that would stand him in good stead for his whole career in scientific research, the bulk of which took place at the National Vegetable Research Station (now Warwick Horticulture Research International). He tackled diseases of lettuce, tomato, cucurbits, brassicas, rhubarb and many more, and found ways to treat them.

In the late 50s/early 60s the British watercress industry was blighted by a disease called crook root. Once infected, vast acreages of watercress beds were laid waste and watercress farmers went bankrupt. Those in Hampshire and Dorset were hit especially hard. Many had tried and failed to find a way to solve it. John was able to prove that it was a fungus and through dogged detective work and by noticing quite by chance that one unaffected farmer had recently changed some of his plumbing he  discovered that trace amounts of zinc – one part in 20 million – was sufficient to kill the crook root fungus. The watercress industry was saved and quickly recovered. “It was like a fairy story” he once told me.

But the achievement he was most proud of was the isolation and purification of cucumber mosaic virus. Indeed in his wallet at his death last week we discovered two photos: one of his long-dead mother and another of the CMV taken through an electron microscope. 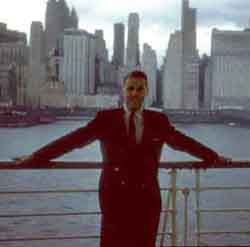 A scientist with an international reputation

In 1958 he took his first assignment in North America, at the University of Wisconsin. Spells at the University of California, at Davis and Berkeley (the latter on a Fulbright scholarship) followed. He lectured at universities and conferences throughout the world and made warm, long-lasting friendships and scientific contacts in Australia, Israel, the Netherlands, Italy and Morocco.

He collaborated on numerous projects and published hundreds of scientific papers, many of which are still cited in articles today.

A mad keen sportsman, he captained his school rugby team, played excellent snooker and golf, and followed Aston Villa football club. In cricket, his highest ever score was 85, just one run more than his age at the final whistle.

For his last 25 years, he battled the intense pain of osteoarthritis but struggled on alone. He was fiercely independent and indeed only last June was he finally persuaded to leave his home of 53 years in Stratford-upon-Avon and move to a care home in Oxfordshire near his children and grandchildren.

He is survived by me, my brother Paul (pictured above in 1965) and his four beloved grandchildren, Cleo, Rupert, Alex and George.

Only last Saturday, when he could still speak and knew he was dying, did he ask that we send his love to all who knew him. If you did know him or work with him and you’d like to come and pay your respects to my father we would love to see you to help send him on his way.

I received a tribute from his long time American friend and fellow professor of plant pathologist Bob Shepherd on Friday 15th June, 2012:

“I am so sorry to learn of the death of your father, my longtime friend, John Tomlinson.

“Many scientists will be saddened by his death. As a retired senior scientist of the UK National Vegetable Research Station he will be mourned by many former colleagues and fellow scientists who will recall his keen intellect and numerous innovative approaches for understanding and controlling several important crop diseases. He was an exceptional example of a scientist who did both basic and practical research.

“I first met your father in 1956 when I was spending an academic year as a Fullbright Scholar at Cambridge. We had attended a meeting at a small research station and were returning to London by train when we got a chance to visit with one another. About two years later your father came to the University of Wisconsin as a Kellog Scholar with Professor J. C. Walker, a famous vegetable pathologist. I was there in the same department as a Ph.D. student. Your father and I at the urging of Professor Walker, worked together to develop a procedure for purifying the cucumber mosaic virus. As I became better acquainted with your father I found him to be one of the most intellectually stimulating people I have ever known. We thoroughly enjoyed our work together and resolved to stay in contact thereafter. You probably remember his sabbatical in 1977 to California where I met the two of you.

“Several of your father’s scientific results will be remembered as classical contributions to biological science. His investigation on the cause and control of crook root disease of watercress is especially notable. It will stand as a monument of his work.

“It was a privilege and an honor to have known him.”

The Pill first becomes available to American women - 9 May 1960

The death of Johannes Gutenberg – 3 February 1468