The River Jordan flows south out of Lake Tiberias 320kms to the Dead Sea, the lowest place on the surface of the earth. The river follows the line of the Great Rift Valley, a meeting of two massive geological tectonic plates which runs north to south for more than 5,000kms from Syria to Mozambique.

The River Jordan now forms the frontier between Israel and the Kingdom of Jordan. At some point along the banks of the River Jordan 2,000 years ago, a Jewish social reformer underwent a watery ritual with his cousin called John in a cleansing ceremony known as ‘baptism’. But human activity in the Jordan valley goes back far, far further than this. With rich alluvial soils, a regular water supply and a good climate it was an obvious choice for humankind to settle and begin farming. And so it came to pass.

Both Israel and Jordan claim to have found the exact place where the baptism occurred. Tourists in any doubt can visit both. We visited neither. We did find something very interesting indeed though. Not far from the more likely baptism site near Bethany-Beyond-The-Jordan on the Jordanian side of the frontier – fields of dolmens.

You won’t find them in any guide books. I only found out about them while flicking through the worthy but spectacularly dull ‘Dolmens for the Dead’ by Roger Joussaume in which the writer virtually overlooks them. A bit of desk research lead me to a small amount of information on the megalithic portal (http://www.megalithic.co.uk) which in turn directed me to HG Scheltema, a kind Dutchman, who sent me a little more information. 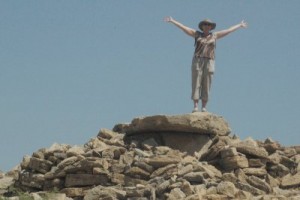 We were on an organised tour of Jordan which allowed no free time. Happily, a cock up by Bastard Airways had resulted in a spare day at the end of the trip. Our tour leader, Carole, an old friend of mine, knew how keen Moth and I were to see some/any Jordanian dolmens, so she phoned Ismael, her local agent in Amman, who she remembered had done an archaeology degree. Ismael didn’t really know where they were exactly but felt pretty sure that armed with our sketchy notes and a bit of luck asking around locally we might find some. He arranged a car for us and an English speaking driver. It was pretty expensive but we’d come all this way. We had to take the chance and cough up the dinars.

Next morning, our driver arrived on time. But it appeared as if he could hardly speak any English and we weren’t confident he knew what we were actually looking for! Dolmens. Yes. He kept saying ‘donads’ (rhyming with ‘gonads’) as if it were the only English word he knew. Or it might’ve been ‘donuts’. Mmmm. We drove off.

Luckily my rough knowledge of Jordanian geography combined with my woefully inadequate notes (one side of A4) indicated that at least we were going in the right direction. We cleared the suburbs of Amman, and passed once again, the Holy Land Shopping Mall (a more loathsome collection of biblical tat you could not wish to find – ‘best buys’ included a model of the Dome of the Rock in mother-of-pearl and a nativity scene made of fimo with a lovingly crafted figure of a man slaughtering a lamb included) and south west onto the Dead Sea Highway.

Stopped at a random roadside checkpoint, we smiled benignly at the man in khaki with a big gun and bushy moustache. The driver showed him my woefully inadequate notes on which was a small picture of some dolmens. ‘OK!’ he smiled and waved us through. A sign at the side of the road showed sea level. The road descended steadily.

I turned my megalithing antenna into ‘maximum search’ mode and scanned the landscape. I knew there were dolmens fields somewhere round here but the likelihood of seeing them from the road was slim. But just a kilometre down the highway from the sea level sign, I spotted something on the barren rocky hillside. Dolmens!!! The more I looked, the more I could see! The driver obviously had no idea they were there. ‘Stop the car!’ we yelled.

We scrambled excitedly up the hot, dusty hillside, crunching limestone rubble underfoot to reach the dolmens.

Just in this tiny area of hillside I counted three still with capstones on and at least six more wrecked ones and traces of several more. It also seemed obvious that a nearby quarry (limestone is second favourite building material only to concrete ’round here) may have destroyed numerous others.

Made of now badly weathered limestone slabs they were mostly the same size – about 1.3ms tall and 2-3metres wide and deep. This was to be the pattern for practically all the dolmens we would see.

I wasn’t exactly sure where we were; the Moab mountains, I thought. ‘Kafrein’ said the driver. I was none the wiser. The Lonely Planet guide maps were too general for our needs. This may have been the Rawdah site according to my notes, but I’m not really sure. The roadsigns showed we were 12kms from the Dead Sea and 6kms from the baptism site. Does anyone know for sure what they are called? The photo above shows their position close the the main road, with the large newly built blue golden-domed mosque on the slopes opposite. Whatever they are called, we were very, very excited about them.

Baptism of fire
‘More donads!?’ said the driver enthusiastically. We managed to work out that he had instructions to take us to see the Damiyah field of dolmens, which according to my note are the biggest and best known. He’d obviously never seen a dolmen before and our passion for them seemed to have rubbed off on him a bit.

Very soon, as the road dropped deeper below sea level, the Dead Sea and the lush flat green plain of the Jordan Valley came into view. And suddenly, right by the roadside – more dolmens! We stopped the car to take a look.

Perhaps six or seven here were clearly visible. There seemed as if there may be more further up the hillside, but it was 10.30 and already screamingly hot with no shade around at all, so we saved our energy for the big prize.

Back into the mercifully air-conditioned car we continued towards our Holy Grail – the Damiyah field. As we approached the area the driver stopped and asked various local people who seemed not to know anything.

We tried a smaller road to the west – but were not confident and were stopped by a checkpoint anyway – we were getting too close to the Israeli border. Back onto the main(ish) road, I spied a ridge on our right and my megalith antenna registered ‘getting warmer’. We drove up a farm track to the right (east). My antenna went into ‘hot’ mode. Suddenly we spotted them! LOADS of them! As we got closer, distinctive shapes broke the skyline! WOW! How the hell we were going to get up that steep ridge I had no idea, but get up there we would.

Armed with sunhats, water bottles and determination we got up the first ridge OK, beyond which was a fast flowing canal. On the other side, the land rose steeply and our dolmens stood near the top.

Scrambling up the red hot ridge we were soon passing dolmen after dolmen not knowing where to start looking; there were just TOO MANY dolmens to investigate!!!

I was aware that the searing heat and the total lack of shade would limit the time we could spend up here and sadly realised that painting would be out of the question.

I reckon there are still maybe 50 or even 60 clearly visible up here stretching along the ridge, dotted around randomly, with some only a few metres from each other.

All wonderful, all unique, and an absolute mindblast! Within one square kilometre up here, there may even be more dolmens than exist in the whole of the England, Wales and Scotland! I’m sure someone will correct me if I’m wrong. Please do!

The dolmens themselves follow a pretty regular buiding style and are similar sizes. I’ll let the photos speak for themselves.

Many have a square cut entrance hole in the ‘front’ (facing roughly north) giving them a unique character.

They are in various states of disrepair.

This one (below) still had cairn material littered about it:

We scampered about the hillside: happy, dusty and with the sweat rolling off. I stood on the capstone of the highest one I could find and surveyed the the Holy Land below:
-Over there is the baptism site.
-Over there is Jericho.
-Over there Mount Nebo, from where Moses saw the Promised Land and subsequently died.
-And right here I was standing in the midst of a necropolis built by civilised, farming people who lived probably 4,000 years before Jesus. Their beautiful tombs are ignored by coach parties of tourists, their magnificent pioneering achievements almost forgotten, overshadowed by the life of a rebellious son of carpenter. They even seem virtually unknown in Jordan itself, and this seems to be the case for dolmens in the other countries that the Jordan Valley runs through.

Disasterously for Damiyah, a quarry just to the north is eating up the slopes of the valley. Many may have already been lost. What chance those that remain have seems uncertain.

Thanks to my gorgeous friend Carole, Ismael in Amman, HG Scheltema and our driver for helping us make this day happen.

UPDATE: Since writing this in autumn 2005, this has appeared about the Damiya dolmen field, which is under threat from nearby quarrying.

Julian Cope: "How much can you take?"