Artist, adventurer, revolutionary - there is much to admire about this misunderstood man

“In art, all who have done something other than their predecessors have merited the epithet of ‘revolutionary’; and it is they alone who are masters” – Paul Gauguin 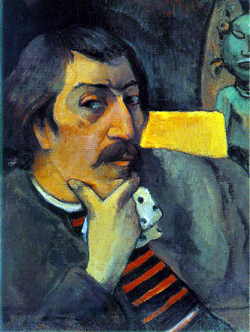 When artist Paul Gauguin’s 54-year-old dead body was lowered swiftly into his grave on the remote Pacific island of Hiva Oa, it was already rotting fast and stinking in the sweltering tropical heat.

His legs, scarred and oozing with syphilitic sores, had two years before carried him to this last wild outpost of the known world, 900 miles northeast of Tahiti and 4,000 miles from the nearest continent, South America. Here, far from ‘civilisation’, he chose to spend his final years, continuing to make great art and to irritate the Catholic church. On hearing of his death the local priest said he was “an obscene and sad character, an enemy of God and all that is decent.” How Gauguin would have loved that!

I’ve had a strange relationship with Gauguin over the years; I’ve always admired his bold compositions, heavy with meaning, and his daring use of colour, but his personal behaviour had troubled me; abandoning his family and taking teenage Tahitian brides. For years I blamed him for the sharp deterioration in van Gogh’s mental health culminating in that infamous ear-hacking episode. Gauguin stirs up powerful emotions. It wasn’t until I discovered more about this complex character that I came to admire his courage, wit and drive.

Gauguin was always an outsider, different. Born in Paris in 1848, he grew up in Lima, Peru. The folk art of these early years in Peru would later haunt his paintings. When he returned to France aged 7, he spoke only Spanish. After years in the stifling cloisters of Catholic boarding school, he joined the navy, keen to get out into the world. Returning to France he became a stockbroker, got married and had five children. For 10 years he tried to conform to a respectable middle-class existence. But it wasn’t enough. He took up painting and immediately displayed astonishing talent. His search for something meaningful and authentic had begun.

He abandoned “everything that is artificial and conventional” and set off first to Panama to try to make some money, but became seriously ill. Recovering in Martinique he was dazzled by the simple life of the native people there. He wanted to pursue his artistic goals among such people and sought out a more ‘savage’ life. His travels would take him to Provence, Brittany, Tahiti and finally the Marquesas.

He quickly made a name for himself with his extraordinary paintings, the like of which had never been seen before. In Gauguin’s world, reality and fantasy are fused. His paintings are dripping with cultural references, symbols and religious iconography. He inseminated his work with the raw power of totems and objects from native or ‘primitive’ cultures.

“I shut my eyes in order to see“

He used distorted and flattened forms and non-naturalistic colours to express fear, lust, jealousy, temptation, power, death, gods, the devil. His potent compositions deliberately leave the viewer asking questions not just about the painting or the artist but about themselves. And he didn’t limit himself to just painting either: wood carving, pottery, sculpture, printmaking, even publishing, his hands were never idle.

(Pictured: Gauguin’s Nevermore, the prettiest and most haunting painting about birth, death, sex, loss, and love)

One or two art dealers, including Vincent’s brother Theo van Gogh, flogged a few of his pictures, but generally they didn’t sell. “No one wants my painting because it is different from other people’s… [the] peculiar, crazy public demands the greatest possible degree of originality on the painter’s part and yet won’t accept him unless his work resembles that of the others!”

Gauguin’s life is a story of rebellion, restless global quests and uncompromising passion. All these elements came together in his paintings which are pioneering, dramatic and beautiful. A giant of modern art, his work influenced most ‘isms’ that came after him: Fauvism, Cubism, Symbolism, Expressionism, Primitivism.

“I am a great artist and I know it”

Despite the nagging poverty, he never wavered. “I am a great artist and I know it.… I’ve known for a long time what I am doing and why I am doing it. I am strong because I am never thrown off-course by other people and because I do what is in me.”

Today, more visitors come to the cemetery in Hiva Oa to visit the grave of legendary Belgian singer-songwriter Jacques Brel (1929 – 1978) than come to visit Gauguin. The two refuseniks are buried just metres apart; they were kindred spirits.

In 1897 he painted his great masterpiece in which he asked the greatest question of them all: D’où venons-nous? Que sommes-nous? Où allons-nous? (Where Do We Come From? What Are We? Where Are We Going?) But the answer? Take a look at the painting  and work it out for yourself:

What is a drypoint: badgers and bluebells