A triptych of paintings in praise of William Shakespeare

As a girl from Stratford-upon-Avon and lover of the works Shakespeare, I wanted to paint a tribute to my hometown’s most famous son – and it’s turned out to be not one painting, but a triptych! This year is the 400th anniversary of his death, the perfect time. I began with the simple idea of a painting of all the plays mapped out in their approximate geographic position on one map of Europe and Mediterranean. The result, completed in November 2015 was my Map of the plays of Shakespeare. It was such fun to paint!

And as I painted it, I realised that there was more fun to be had. Many of the plays take place in the British Isles and Italy, and each of those places deserved a painting in their own right. So over Christmas and New Year I created Shakespeare’s British Plays, which was immediately followed by Shakespeare’s Italian Plays completed in February 2016.

All three paintings were made entirely for my own pleasure – and what a joy it’s been researching each one. So many kings, Romans, lovers and fighters, heroes and villains! I had no idea that I’d end up with a triptych, but that’s Will Power for you!

Each original painting is size A1, painstakingly painted by me in watercolour. They will be exhibited together at the Montpellier Gallery, 8 Chapel Street, Stratford-upon-Avon,  CV37 6EP, England, from 19 March to early May 2016. They will be on show again in late May 2016 in my exhibition for Oxfordshire’s Artweeks visual arts festival, at my home in Eynsham, near Oxford. Read more…

Grab yourself a piece of The Bard

Prints and greetings cards are available of each of the paintings right here on this website. Prints are signed by me, and I ship worldwide. They make wonderful and unusual gifts for all lovers of the English language and have been especially favoured by thespians and English teachers all over the world. Brighten your blank walls with The Bard! 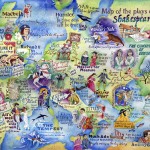 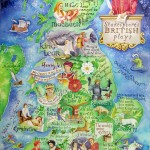 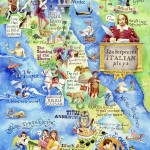 Constellations of the Northern sky