50 things to love about Britain

50 things to love about Britain

As an antidote to Brexit, and in an effort to remind myself of some of the things I love about my country, I thought I’d map them in a painting. I hesitated to call my painting Best of British , because somehow that phrase is charged with the kind of patriotic zeal I object to, but that exactly what I’ve painted.

A2 prints of this painting available here 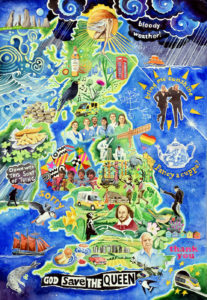 So here goes with my “Best of British” – a painting of 50 things to love about Britain. You may not agree with all my choices, but I hope some of the things you love about Britain are shown. Roughly, going from the top down, and left to right:

A2 prints of this painting available here

Gifts for Christmas – easy-to-post goodies direct from the artist

“As the Crow Flies” – a signpost installation lockdown project

Paintings from the riverbank – as lockdown eased